Early Sunday morning, I tweeted out these words:

Discovering that the less Methodist a #umc church looks, the more Wesleyan it becomes.

A number of my friends in the Twitterverse asked me to “explain” or “unpack” or “elaborate” . . . none of which are you really able to do in the character limitations of Twitter.  So, with no such restrictions on this blog space, here goes:  how it is that I believe a church can become more Wesleyan by looking less Methodist?

First of all: what does it mean to be “Wesleyan”?  While my summary is not exhaustive, it certainly involves . .

An evangelistic spirit — “you have nothing to do but save souls.”
A burden for holiness — “spread Scriptural holiness across the land.”
An unwavering belief in both prevenient grace AND free will — for example, Wesley’s ‘Predestination Calmly Considered’ in which you open the booklet and there is nothing calm about it.
A commitment to a living faith made evident by good works.
A celebration of the gift of assurance — “he has taken away my sins, even mine.”

Those characteristics drew me to the Methodist movement in the first place, prompted me to receive training at Asbury Seminary, and motivated me to enter UMC ministry.

Yet the sad irony is that many of the structures a local United Methodist congregation adopts in its effort to be faithfully United Methodist — structures that by and large arose in the 20th century — actually inhibit that church’s ability to be authentically Wesleyan.

Liturgical legalism that arranges & formalizes many of our worship services so that there is no opportunity for an invitation to salvation at the conclusion.  Altar calls become “what Baptists do” instead of what Methodists celebrate.

Hymnal loyalty that while it honors the musical treasures of our tradition, nevertheless makes it difficult-if-not-impossible to adopt musical styles that reach emerging generations.  And singing Freely, Freely on an acoustic guitar does not make your music “current” or “generational.”

Special Sundays & church fund raisers that nickel-and-dime people via special offerings rather than teaching them the robust truths of giggling generosity.

Outdated Ecumenism that takes Wesley’s “Catholic spirit” in one direction — straight left.  It’s why many United Methodists consider our membership in the  National Council of Churches to be a vital expression of our interdenominational spirit but recoil at the thought of attending an Orange or Catalyst Conference — places where genuine ecumenical energy is unleashed these days.

In our current context, local churches who follow the United Methodist Hymnal’s “order of worship,” who participate in each of the denomination’s six Special Sundays, who support the NCC, and who put the cross & flame logo on their bulletin (by the way, has anyone considered the impact of burning crosses if you’re trying to grow a multi-ethnic church?) are considered Methodist.

On the other hand, a church like Good Shepherd, with its rock band, its no-special-offering-or-fund-raisers-allowed policy, its frequent invitations to salvation, its own logo with no intersection of fire & cross, and its mission partnership with churches and agencies of all kinds is considered to be rebellious.

One time I was even referred to online as a “formerly Methodist pastor.”

Yet I would say that it is precisely because we don’t look very Methodist we have been freed up to be authentically Wesleyan.

We mess up.  We make poor decisions. We don’t always live up to our potential.

However, people get saved.  That’s right.  In church, they stand up to surrender their lives to Jesus as Lord and Savior.

People move to maturity and holiness.  The entire Wash Me! series was an extended exploration of how God empowers us to live holy lives in the 21st century.

People give.  Boy, do they give.  Because they are not nickel and dimed, they give faithfully, gigglingly, and extravagantly — especially when they know we are going to give a whole lot of it away.

And just yesterday — because we have flexibility in how we begin and end each service — the people of the church celebrated the gift of assurance by rejecting “partial acceptance” and accepting the full. Here’s what it looked like: 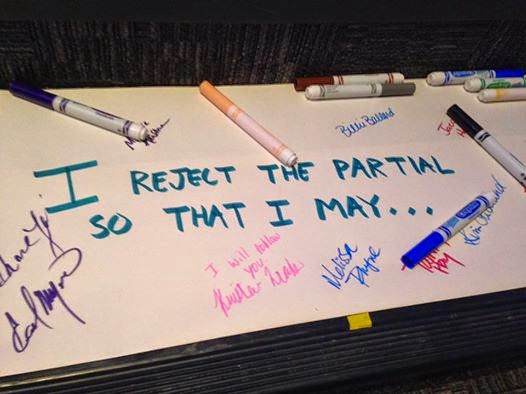 Did we get that from the Methodist hymnal?  No.

Did it come from a church with a heart like Wesley’s?  I pray so.