Baptism At An Indian Shrine

I guess I feel like the timing was providential.

Timing of what?  The report I received this week from some of our partners in ministry in eastern India regarding a baptism.  A believer baptism.  Conducted in the shadow of a Hindu shrine. 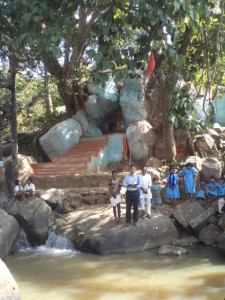 While we Methodist Americans were debating such esoteric issues as sacramentalism and chargeable offenses, our Indian friends were conducting a death-and-life celebration that could well mean . . . well, life or death. 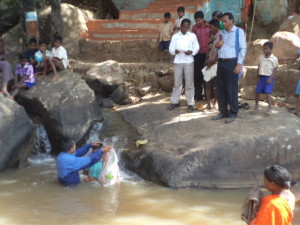 Our courageous brothers and sisters don’t have much time to discuss the nuances and subtleties of By Water And The Spirit.  They are instead living The Book Of Acts in real time, a time in which declaring that Jesus is King and the gods of the Hindu pantheon are not can cost you your life.

But they decided it was worth it.  They shared faith, gained converts, and had them go public by getting them wet. 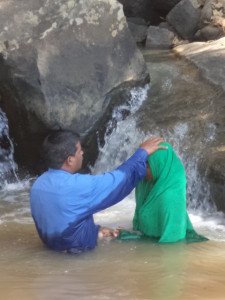 Sounds pretty Wesleyan to me.

Here is the report from the ground, slightly edited for safety’s sake:

Baptism near   a Shrine, Unbelievable.
Lord is at work in this part of the world. He again showed His greatness in one of the remote villages .The names of the village is . . . . 13 people testified Jesus Christ as their Lord and Savior by taking water Baptism just near the shrine once it was their place of worship for many years.

Surprisingly there was no opposition. For the non believers it was a curiosity to know what would happen at the Shrine. We preached about the love of Christ at the church. 13 people gave their heart to Jesus. They were filled with the joy of having their sins forgiven, accepted as sons of God, and assured of having life eternal.

There was big procession from the church to the site through the main road of the village. All sang hymns in local language glorifying the Lord and some played the musical instruments. We reached to the spot.

Lord gave me courage to stand and preach on the Love of God as revealed in Jesus Christ who would call the people to repent for their sins and get  baptized in order to inherit the Kingdom of God. After the message and prayer two by two husband and wife by holding their hands entered the water and took baptism from our pastor Sanjaya Digal.

After Baptism we returned to the church by the same manner. We accepted the newly baptize believers into the membership of the local as well as universal church by shaking their hands. They were served Lord’s Supper who remembered the love of Jesus Christ with the church members witnessed their baptism.

Everyone enjoyed and glorified the Lord. Sister . . . , our lady evangelist stayed there to encourage  them  and we returned to the Mission head quarter praising the Lord for His marvelous work.