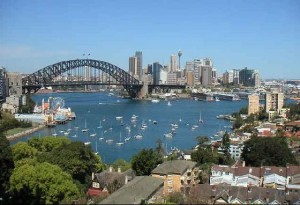 The Australian Open began this week.

It’s one of the four “Grand Slam” tournaments of professional tennis, along with the French Open, Wimbledon, and the US Open.

It also brings me back to the time I lived in Sydney, Australia for five months when I was 14.

My father was on a sabbatical from his faculty position at the SMU Law School. So he arranged a project at a university in Sydney, and took my mother, brother, and me along between January and May of 1976.

We stayed in a 12th floor apartment that had a spectacular view of the Sydney Harbor, pictured above. To work on my fitness, I used to run up those 12 flights of stairs to the apartment. And I wonder why I developed some back problems?

Some other random memories from life in Australia . . .

1) I played tennis on grass courts for the first time. Awesome.
2) I went to Vaucluse Boys High School and had to wear a uniform every day. Not awesome.
3) Instead of hamburgers, Australians liked meat pies. Almost like a single serving chicken pot pie except stuffed with beef and then drenched in ketchup. It grows on you.
4) Driving on the left side of the road. Yikes.
5) In rural Australia, we really did have kangaroos jump across the road in broad daylight, much like deer do here at night. Except for the road kill part.
6) Many street corners in Syndey had “hotels” . . . which is another name for “bar.”
7) One time we went to a cricket match. In a stadium that seated thousands, there were literally 25 people in attendance. Later, I went to a couple of rugby games. If you’ve seen Invictus, you know what it was like. Very cool. No, I never played.
8) In 1976, Australians could not play basketball. I was the only one at Vaucluse Boys High School who could dribble or knew the rules.
9) For the first two months, I was dreadfully homesick for life in Dallas. By month #5, I didn’t want to go home.
10) Fair dinkum was a catch-all phrase sort of like “OK” or “well done.” I’ll use it to say “I’m done” today.