Anatomy Of A Radical Impact Project

At Good Shepherd, we have a how that goes along with our what.

The big what around here is our mission:  Inviting All People Into A Living Relationship With Jesus Christ.   We love those words and that focus.

But in developing that mission, we also took some time to spell out how we will accomplish it.  We came up with a strategy that has four layers:

The first three are pretty much self-explanatory as well as common fare among churches: to accomplish any Christ-centered mission, you will need to worship, you’ll want to re-gather in smaller groups, and you’ll want to serve inside and outside the congregation.

Yet the fourth — Radical Impact Projects — is unique to this community.  We have noticed through the years that when the people of this church are presented with bold initiatives that seem to fly in the face of common sense, they respond with enthusiasm and generosity.

It’s why for Christmas of 2010 we celebrated not with mangers, angels, and shepherds, but with honest lessons about human trafficking, the global sex slave trade, and the imperative to give — and the people of the church gave $207,000 to the International Justice Mission in response.

That was a Radical Impact Project.

It’s why in October of 2011 we took one Sunday and instead of worshipping with songs and a sermon, we worshipped with hair nets, food bags, and soy products — and the people of the church packaged 293,000 meals for famine-torn Uganda.

That was a Radical Impact Project.

And it’s why yesterday the church went home.  As the culmination of the Courageous series, we didn’t have Sunday morning worship on campus but resourced and equipped families to celebrate worship in their own homes.

Moms and dads, grandmoms and granddads, nuclear families and single adults, all gathered in small communities of faith and studied the story of Jesus and Zaccheus from Luke 19.

Faith began at home.  Parents passed on faith to their children instead of passing that responsibility off to the church.

And over and over throughout the day I heard reports of families gathering around their breakfast tables, opening up their bibles, and talking honestly about Jesus.  Together.

And best of all, I heard of and spoke to dads who for the first time in their lives assumed the role of spiritual mentor in their children’s lives.

So nobody came to church yesterday morning.  But everyone had church.

That’s what a Radical Impact Project is all about.

We invited the Good Shepherd community to gather back together on Sunday afternoon for a Spring Celebration Picnic. About 1,000 people showed up and celebrated what God had done in homes that morning by taking part in music, games, balloons . . .

. . . a rock climbing wall for the adventurous spirits 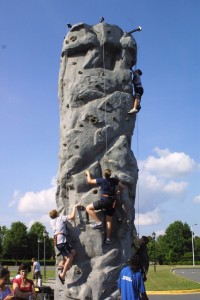 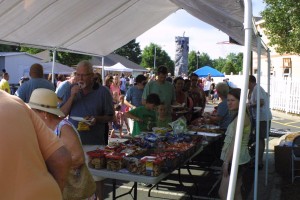 . . . and, of course, a Dunk-The-Pastor Dunk Tank. That’s me after about five soakings. 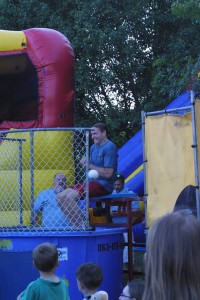