Every so often, something I say in a sermon elicits spontaneous applause from the people of Good Shepherd.

I can’t generally predict when this will happen . . . usually it follows a bold-ish comment about the unique-ness of the Risen Christ.

Whenever and wherever it happens, I’m grateful.

This Sunday had a line in the sermon — a line not in the composed manuscript but something I only thought of this week — that each service greeted with enthusiastic clapping.

Was it a great theological claim? No.

Annoucing a bold initiative for the church? No.

It was, instead, a brief line tucked in the middle of a story about Hank Aaron. 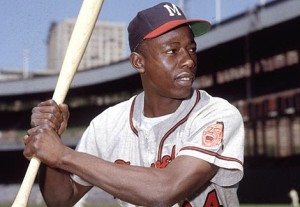 The applause line wasn’t even the meat of the story I was telling.

Because what I related about Aaron involved (of course) him hitting a home run. (This one off of the Yankees and inspired by the incessant jabbing of Yogi Berra.) So I said simply, “BOOM! Over the center field wall. One of 755 STEROID FREE home runs.”

The first time I was shocked; by the third hour I was prepared.

I suppose it goes to show you that in the days of athletes giving us TMI via Twitter, Facebook, or even legal testimony, people are longing for genuine heroes.