In John Irving’s novel The Last Night In Twisted River, the narrator makes this observation:

But family histories – chiefly, perhaps, the stories we are told as children – invade our most basic instincts and inform our deepest memories, especially in an emergency.

I can’t let go of that sentence. It’s one of those narrative insights into human nature that makes good fiction more “true” than real life.

Because isn’t it true? The stories we are told as children shape and determine what we value as adults?

For me, on this day, that’s a heavy truth with a light application.

Because what story was I told most frequently as a child? To love and support SMU football.

As my dad was a member of the faculty there, we went to home games at Cotton Bowl, we watched away games on television when we could, and we died a thousand deaths every time our Mustangs lost to the Longhorns, Aggies, or Horned Frogs.

Now I didn’t go to SMU myself. I haven’t lived in Dallas since 1980. I didn’t even go to seminary there — which I could have since it is obviously a “Methodist” school.

So why did I call my brother when SMU jumped out to a big early lead against nationally-ranked and highly regarded TCU on Saturday?

And why did I text my son to make sure he was keeping up with the same game?

And why was I nervous as a cat when SMU blew a large lead and the game went into overtime?

And why did I react just as these players did when the Mustangs held on that final fourth down to secure their first win over a ranked team in, well, ages? 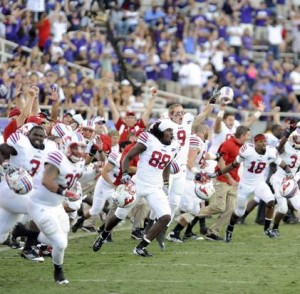 I know. Because of the stories I was told as a child.