This story appeared in the June version of the Asbury Seminary Alumni e-magazine: 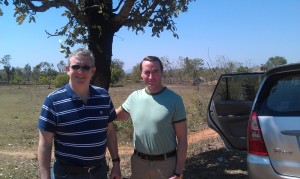 In September of 1987, Talbot Davis and Brent Burdick both arrived on the campus of Asbury Seminary.

That first semester, the two were even in the same classroom – David Thompson’s Mark class, part of what was then called the English Bible curriculum.

Yet despite their simultaneous arrival, their time together in Mark, and even their three subsequent years of study, Davis and Burdick never met while in Wilmore.  Both graduated in 1990, yet they did so without ever having spoken to one another.

Fast forward twenty-one years.  In 2011, Davis was busy pastoring Good Shepherd United Methodist Church in Charlotte, NC, where he had served since 1999.  Burdick and his family had just returned to the US following a twenty-year stint as missionaries in the Philippines with OMS.  They relocated to, of all places, Charlotte, North Carolina — to a subdivision down the street from Good Shepherd United Methodist.

The Burdicks visited Good Shepherd on their first Sunday in Charlotte, received a coffee mug gift from the church and a follow up hand written note from Davis, and so decided to return the next week.  During that second week lobby conversation, the Asbury connection was established, the Mark EB assignments remembered, and a new friendship established.  The Burdicks quickly assimilated into the life of Good Shepherd.

In March of 2013, Davis & Burdick traveled together to India (along with a third teammate from Good Shepherd, this one an alum of Gordon-Conwell!) in order to minister with two groups of pastors in the eastern state of Odisha.  Davis taught leadership lessons from the kings of Judah while Burdick shared his ministry experience and how it is that pastors on the front lines can have healthy homes and families.

That’s what the seminary means by “the whole bible for the whole world” – even if it takes over 20 years to make it happen. 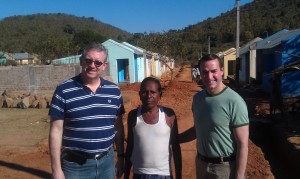