A Tale Of Two Tourist Stops

For our final day in San Diego, I spent time at two tourist destinations.

One of them was what everyone does while in the city: the San Diego Zoo.  In a word: as good as advertised.

(Actually, that’s four words, but you get what I’m saying.)

Whether it was jaguars, pandas, or gorillas, the animals were close enough to touch and active enough to be appreciated.

The second tourist stop was one I imagine very few people go to: The Bobby Riggs Museum.

Some of you remember Bobby Riggs: he was 55-year-old former tennis champion who challenged Billie Jean King to a $100,000 winner-take-all “Battle of The Sexes” in Houston, Texas in 1973.  If you were around then, you remember that it was one of the cultural milestones of the era.

The match summed up so many emerging social issues of that time: gender roles, commercialism in sports, and even the surging popularity of tennis which went from the enclaves of country clubs to the cover of Time Magazine in just a couple of years. 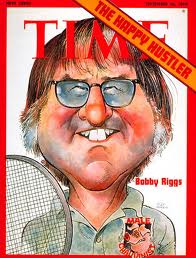 And, in case you didn’t know, Billie Jean King demolished Riggs in three straight sets and set the stage for the enduring popularity of women’s tennis — from Chris Evert through Martina Navratilova and all the way to today’s Serena Williams.

Well, there was a lot more to Bobby Riggs than that match in 1973.  He won Wimbledon’s Triple Crown in 1939 — Men’s Singles, Men’s Doubles, and Mixed Doubles.  He also won the U.S. Nationals (now called the U.S. Open) in both 1939 and 1941.  In fact, if it hadn’t been for World War II and all the tournaments that went unplayed during those four years, Riggs might have many more majors to his credit. 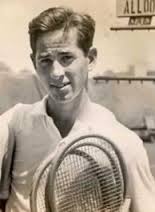 The museum itself is sort of non-descript — it occupies a couple of large rooms within a tennis club in Encinitas, California.

But on the inside is a tennis lover’s dream: vintage photos of Jack Kramer, Pancho Segura, Margaret Court, and yes, even Billie Jean King, along with World Tennis Magazine covers from the 60s, 70s, and 80s.  I stayed for about 30 minutes but easily could have turned it into four or five hours.

So: a world famous zoo and an almost unknown tennis museum in one day.  Guess which one made a bigger impact?