Last year at about this time, I posted with some sadness, regret, and anger about a state championship title that was denied my son Riley and his relay teammates at Charlotte Christian School due to a “wardrobe malfunction.”

You can read about that day here.

Well, as state championship track meets do, this one came around again.

So we spent Saturday in the blazing heat of Winston-Salem at the 2011 NC Independent School Athletic Association meet.

And when it came time for the 4 X 200, Riley and his teammates were ready. Most importantly, I guess, their uniforms matched.

Now — I’m not a track expert & I don’t go to many of his meets. The ones I do attend . . . well, I get too nervous to watch the baton transfer. I can watch Riley run, but when it comes time to hand the baton off to the next sprinter, I turn away.

I didn’t need to take that precaution.

Riley and his three partners didn’t just win the 4 X 200. They dominated, winning by almost two seconds — an eternity in the sprint world — and setting a state record in the process.

So my son is a state championship in a sport I know almost nothing about; in a sport he couldn’t have even participated in four years ago.

I couldn’t be prouder.

And, as we’ve been hearing in quite a different context recently, justice was served. 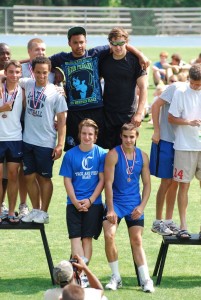