When The Brewmaster Gave The Preacher A Theological Vocabulary Lesson

My son-in-law Nate Underwood is the Co-Founder and Brewmaster of the Harding House Brewing Company in Nashville. That’s him, third from left, in the photo below. 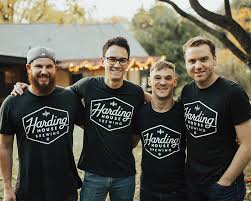 To those descriptors, we could add purposely religious.

He often names his beers after well known authors and theologians such as Flannery O’Connor or St. Brigid and even after religious concepts like “Renewal” or “Third Way.”

With some animation and no little enthusiasm, Nate, the BREWMASTER explained this theological term to me, the PREACHER.  Prolepsis is a biblical concept that embraces the “already” and the “not yet” of the kingdom of God.  “[T]he kingdom of God is in your midst,” Jesus says in Luke 17:21.  As in now.  Today.  Fully.

Fully.  But not finally.  That happens when “the Lord is revealed from heaven in blazing fire with his powerful angels” (2 Thessalonians 1:7).

In the meantime, we get glimpses. Foreshadows.  Assurances.  Appetizers.  Those experiences of kingdom joy that prepare us for the everlasting joy that will come to us when He comes back.  All rooted in the assurance that what happened to Jesus’ body will in fact happen to ours … that’s why Paul puts it this way in I Corinthians 15:20:  “But Christ has indeed been raised from the dead, the first fruits of those who have fallen asleep.”  His resurrection is a downpayment on ours.

In the meantime, we live in light of that impending, inevitable reality.  It’s why we can sing with confidence that “the resurrected King is resurrecting me.”  (Hallelujah!)  It’s even why we long to gather for worship in person, knowing that each full color gathering is a sneak preview of worship in heaven as Revelation 7:9 describes.

So what does this admittedly glorious concept have to do with the crafting of beer?  Well, this is a little beyond my personal expertise (duh), but as best as I could tell, the Proleptic beer will be a farmhouse style brew with green tomatoes designed to evoke the abundance of the Parable of the Great Banquet in Luke 14:15-24.  As Nate told me, “Since in the kingdom to come, all will have full stomachs and full joy, why don’t we live like that now?”  Indeed.

We know what’s “not yet.” But we can live in the anticipatory glee of the “already.”  It may have taken a brewmaster to show me these theological ropes, but I’m all about it.