A Case Study In Uncovering A Bottom Line

Last Sunday (November 11) was my first message in 2018’s ThanksLiving series.  The bottom line I eventually uncovered/discovered has some real “stickiness” to it, but the process of arriving there was anything but simple.  Here’s what I mean.

I first had the Scripture — the story from Luke 17 of Jesus healing ten men with leprosy.  Only one returns to give thanks … and he is a Samaritan, an outsider, doubly rejected due to his disease and his enthnicity.  Here’s the biblical text:

11 Now on his way to Jerusalem, Jesus traveled along the border between Samaria and Galilee. 12 As he was going into a village, ten men who had leprosy[a] met him. They stood at a distance 13 and called out in a loud voice, “Jesus, Master, have pity on us!”

14 When he saw them, he said, “Go, show yourselves to the priests.” And as they went, they were cleansed.

15 One of them, when he saw he was healed, came back, praising God in a loud voice. 16 He threw himself at Jesus’ feet and thanked him—and he was a Samaritan.

17 Jesus asked, “Were not all ten cleansed? Where are the other nine? 18 Has no one returned to give praise to God except this foreigner?” 19 Then he said to him, “Rise and go; your faith has made you well.”

I knew there was a common thread of the LOUD VOICES that ask for healing in 17:13 and then the repeated LOUD VOICE giving praise in 17:15.  (The sermon actually said that “It’s not by accident because Luke is no accidental writer. He’s a verifiable genius.)

The closing line’s enigmatic claim — your faith has made you well — adds to the common thread of VOLUME.  Does that closing line mean that the other nine aren’t healed?  Or that their healing is temporary?  Does gratitude ensure healing? Those kinds of questions led to this kind of scribbling: 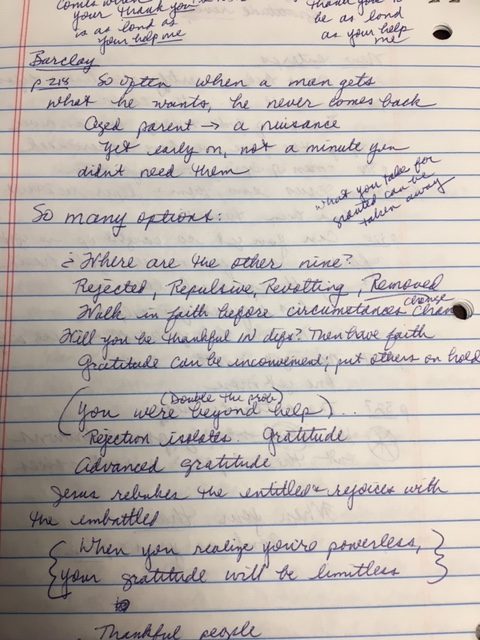 When you realize you’re powerless your gratitude will be limitless.

Authentic healing happens when your gratitude is as intense as your desperation.

What you take for granted can be taken away (not original with me … and maybe an overstatement).

Gratitude is inconvenient and incomparable.

Where are the other nine?

All of them solid.  I especially liked the contrast of desperation BEFORE the miracle matching the gratitude AFTER it.

So at this stage the gratitude/desperation contrast could have been a good bottom line:  Authentic healing comes when your gratitude is as intense (or loud?) as your desperation.

Yet I kept scribbling because most of the time a good bottom line thrives on simple language.  Gratitude and desperation  are strong words but not simple ones.

And then, in the midst of the scribbling, the obvious came out. Substitute “so help me God” for desperation and “thank you Lord!” for gratitude and replace “authentic” with “real” and you’ve got a bottom line that is both simple and memorable:

Real healing happens when your ‘thank you Lord!’ is as loud as your ‘help me God!’

The reason I know this one “worked” (believe me, they don’t all work to this degree) is how many times people have repeated it back to me this week.  In text messages.  On Facebook. Via emails. Through phone calls.  When loved ones are in the hospital.  When a family receives a blessing.  When an apparently hopeless situation turns hopeful.  All week long I’ve been hearing it played back to me:  Real healing happens when your ‘thank you Lord!’ is as loud as your ‘help me God!’

And it’s those times where you realize that small amounts of scribbling, fine tuning, and simplifying can make a large difference.

Simplify the message.  Multiply the impact.