Some dear friends from Good Shepherd handed me this cassette tape on a recent Sunday morning. 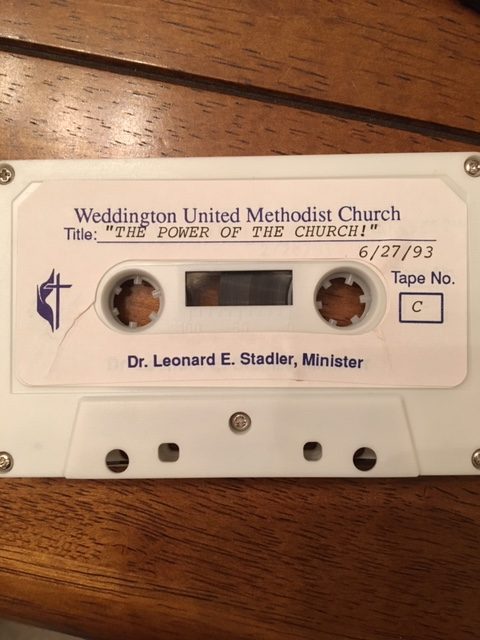 When I was a young preacher in Monroe, North Carolina, the ministry of Lenny Stadler at Weddington United Methodist Church almost defied belief.

Throughout the decade of the 1990s, he led what had been a sleepy little country church into the kind of growth that made it one of Methodism’s superstars.

In ten years, that church grew from about 120 per Sunday to 1200, moved its campus across the street of one of the area’s busiest roads, and did it all with an evangelical theology and revivalistic fervor unknown in most Methodist circles.

As a young pastor just learning my way in ministry, I had never heard that such growth and accomplishments were even possible.

The closest parallel I can think of these days is that Lenny & Weddington were to Methodism what Elevation Church is to Metrolina today, both in terms of swagger and results.

While we shared core theological convictions, Lenny and I were more acquaintances than friends.  We had an age gap of 10 years and I have always been leery of joining an entourage surrounding pastors who are bolder and higher profile than I am.

Lenny left Weddington in 2007 and subsequently contracted colo-rectal cancer and died in 2012.  We miss him in the Western North Carolina Conference.  Fortunately, with strong leadership after Lenny, the church has remained one of the leading congregations in our Annual Conference.

But back to the cassette tape.  Some enterprising staffers at Good Shepherd figured out a way to turn that tape into a CD (itself an ancient technology for the staffers in question) so that I could play the sermon in my car.

So play it I did.

What a treasure.  Now: some elements were dated.  Lenny could assume his congregation knew biblical content and even Methodist polity in a way pastors (at least the ones paying attention) never can today.  He had multiple points that he even counted off, a la Rick Warren and Charles Stanley.

But his charisma was unmistakable.  As was his wordsmithing.  And he had the crisp, clear pronunciation of a communicator who both loves and hones his craft.

Yet more than anything else, what emerged from that sermon was an uncompromising faith in the saving work of Jesus and the empowering work of the Holy Spirit.  Yes!  A Methodist preacher who talked about, celebrated, and was drenched in the Holy Spirit.

This in the same denomination whose challenges in that era were memorably summarized with this line:  “It’s not that we’re too liberal  It’s that we’re too boring!”

Well, Lenny was anything but boring on that Sunday in 1993.  His message pulsed with the power of the Holy Spirit and the emphatic call to a deeper life of faith.  In fact, he was so UN-Methodist that you knew he was actually the MOST Methodist of them all — a genuine revivalist in the mold of John Wesley & Francis Asbury themselves.

I realized yet again in listening to a message from a quarter century ago: for all that Good Shepherd has done wrong, we’ve gotten a few things right along the way as well.  And those things we’ve gotten right have always had to do with our surrender to biblical authority and our celebration of the Holy Spirit’s power.

In other words, those things that make us not UN-Methodist but the MOST Methodist of them all.

Lenny doing what he did prepared the way for us to do what we do.

I suspect he is among our cloud of witnesses cheering us on to deeper passion and greater power.