What If Churches Had A Draft?

I peeked in at the NFL Draft Coverage on a couple of different occasions this past weekend. 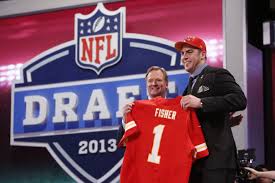 As you would expect, there was bloviating galore from the experts on which teams were winners in the draft, which were losers; which prospects are can’t miss and which are can’t make.

Which begs the question: what if churches got to draft the people who would join them?

You’d have an expansion draft for church starts.

You’d have the churches that are struggling the most get the highest pick (hello Kansas City Chiefs!).

And the churches with the greatest strength coming in to the draft would have to pick last in each round, just like the Baltimore Ravens this year.

Most churches would look for folks who are . . .

Nice looking — so they can serve as greeters.

Some church experience but not too much — so they speak the language of church but don’t bring baggage from three or four church splits in their background.

Financially healthy — so the church will be too!

Well known in the community — so people will know the church has that indescribable “it” which draws attractive people.

Perhaps you have qualities you’d add to the list.

Paul did.  Except the people “drafted” into salvation and service through the church at Corinth are quite diffferent from what we’d expect.  This section from I Corinthians 1:26-31 should be required reading and memorizing for all who are interested in church leadership:

26 Brothers and sisters, think of what you were when you were called. Not many of you were wise by human standards; not many were influential; not many were of noble birth. 27 But God chose the foolish things of the world to shame the wise; God chose the weak things of the world to shame the strong. 28 God chose the lowly things of this world and the despised things—and the things that are not—to nullify the things that are, 29 so that no one may boast before him. 30 It is because of him that you are in Christ Jesus, who has become for us wisdom from God—that is, our righteousness, holiness and redemption. 31 Therefore, as it is written: “Let the one who boasts boast in the Lord.”

The people who started the church in Corinth would have gone undrafted.

They weren’t well connected enough, rich enough, or smart enough, and so the scouts passed them right over.

Yet God didn’t.  Those “undraftables” became the free agents he called to turn the world upside down.

Something tells me nothing’s changed.