This is an unusual preaching week, which means it is also an unusual blogging week.

Sunday’s message in the Wait For It series was called Worth The Wait and I was delighted to see the impact it at on so many lives in our church.

Then for Christmas Eve the series went to The Wait Is Over.  Drawing from Luke 2 with support from Romans 8, and then meandering through our move to Kentucky in 1987 and touching on those times when you KNOW people are talking about you, the message arrived at one of my favorite Christmas Eve bottom lines:

When you have whispers behind you and questions in front of you, you need eternity inside of you. 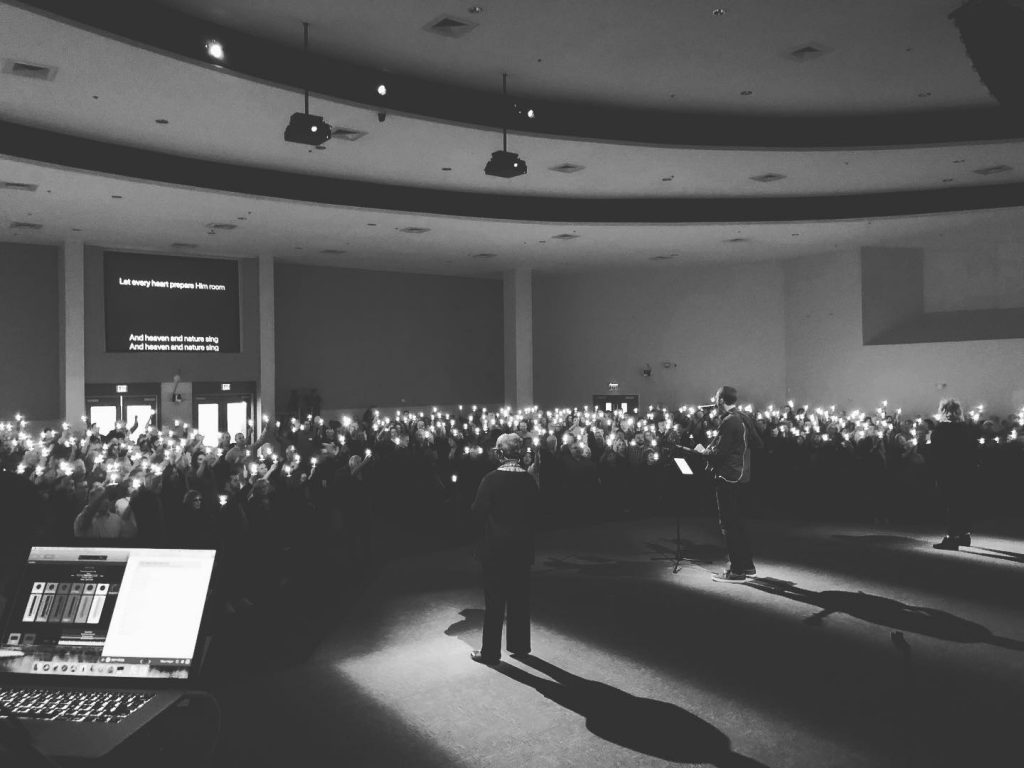 Well, some of you in the room tonight know this from experience and others by direct observation and then a lot of you because you’ve HEARD about it … but here is the truth:  nine months of pregnancy is a LONG TIME to wait.  It really goes from GLOWING to SHOWING to GROWING doesn’t it?  The early days where, in spite of morning sickness and the understandable anxiety of getting through the miscarriage danger phase (many don’t, sadly), newly pregnant moms with slowly growing embryos are positively GLOWING.  Then midway through comes the Baby Bump which, of course is when mom starts SHOWING.  Then that last third there is GROWING where, for a lot of times, you’re convinced you’re going to be pregnant for 11 months, not nine.  It’s a long, strange trip for mom and for dad alike … and many times I’ve been aware that the stress mom feels during that season baby reflects after birth.

And that’s where Mary finds herself on that first Xmas Eve.  It’s been nine months of glowing, showing, and growing, as she and Joseph enter what was likely cold and remote Bethlehem.  She’s been waiting a LONG nine months.  And finally it’s the end of her waiting.  But when I think of that Mary carried with her into Bethlehem, in addition to Joseph, the donkey, some onesies for the new baby, a set of Pampers, it occurs to me that she also carried a lot of BAGGAGE.  Because behind her, all the way from Nazareth, I assume, were whispers.  I mean, how could there not be TONS of whispers back in that day?

Can you believe she’s pregnant?

Did you hear who she says is the daddy?

I wonder who she is protecting?

Why would Joseph tolerate this?

Doesn’t she know the cover-up is always worse than the crime?

Everywhere she went, no doubt, there snickers, finger pointing, name-calling, and whispers.

Some of you know what that’s like.  As you walk in to church on Xmas Eve you know about having whispers behind you.  Literally behind your back sometimes.  You’ve been there when you walk into a room and the conversation stops and then you walk out and there are the barely suppressed bursts of laughter, and you KNOW without a doubt you were the subject.  Some of you know what it’s like when the whispers deal with an out of wedlock pregnancy.  Or even:  “you’re gonna come into church after what YOU’VE done?”  Years ago, in Monroe, I overheard someone say, “He’s too high-falutin’ for us!” and the subject was ME as their preacher!  Or some of you even have those whispers of “you’re goo as you are.  You don’t need any religion anyway.”  So what do you do when, like Mary before you, you arrive on Xmas Eve with a trail of whispers behind you.

And then Mary not only had a trail of whispers behind her, think of all the questions that are in front of her!  A slew of them, all of them natural and normal.  Who will believe us now?  Will my family or our town ever accept Joseph?  Will this baby always be thought of as illegitimate?  How are we going to pay for him?  Will random angels keep showing up and talking to me?  Is this REALLY where babies come from?  All her uncertainties!  Full of what ifs? and who wills?

And I know for sure that a lot of you have come into Xmas Eve and I KNOW the kinds of questions that are ahead of you.  Questions like … Will my family still be together NEXT Christmas?  Will my job still be there in January?  Will I keep the faith I just barely accepted?  Will I have a relapse … again?  Will I be able to pay for all the medical stuff around the corner?  Will I ever find someone with whom I can share my life?  Mine is this:  “When will this church reach its vast potential?”  Questions ahead of you.  Mary may have paved that road but it is a well-worn path now.

So what do we do?  How do we survive that kind of dilemma of disrespect and innuendo on the one hand and uncertainty on the other.  Look what happens in Luke 2, in such a brief sentence it’s almost like it occurs offstage:

6 While they were there, the time came for the baby to be born, 7 and she gave birth to her firstborn, a son. She wrapped him in cloths and placed him in a manger, because there was no guest room available for them.

So simple.  So epic.  Because you know what we believe and what the church teaches, don’t you?  That baby … was God.  Not a teacher, not a role model, not a prophet, but God wrapped up in a human body.  Infinity took on infancy.  Better than that, all that time that Mary was waiting for the pregnancy to end and the baby to come, while she was enduring the whispers and facing the questions, Eternity fit into an Embryo.  Yep, we believe that.  We believe it so much that’s why we keep showing up.  Mary carried embryonic eternity with her while she waited those nine months of Ancient Near Eastern pregnancy.

And that’s how.  That’s how she was able to withstand the attacks on her character and the questions about her future: by remembering who & what she was carrying.  What was inside her. Here it is for us:  When you have whispers behind you and questions in front of you, you need eternity inside of you.

Now, before you ask:  no one hear will carry the Son of God and give birth to the Messiah. That’s been done once, never to be repeated, but the good news is that we have an even better option.  Because look at what Romans 8:10-11 says:

10 But if Christ is in you, then even though your body is subject to death because of sin, the Spirit gives life[a] because of righteousness. 11 And if the Spirit of him who raised Jesus from the dead is living in you, he who raised Christ from the dead will also give life to your mortal bodies because of[b] his Spirit who lives in you.

Glory!  You’re in the middle of a world marred by difficulty and confusion and if you don’t get not only the PERSPECTIVE of eternity but the POWER of it as well, you’re sunk.  Because I so remember in those days and weeks after giving Jesus my life, I had an unmistakable, indisputable UP feeling in my gut.  Elevated.  I now know it’s because someone had taken up residence there – only unlike a parasite who drains life from you he is a resident who gives it and gives it abundantly. When you have whispers behind you and questions in front of you, you need eternity inside of you.

It’s kind of funny.  My wife Julie is from the NE.  I mean, Giants & Yankees NE.  And we married right out of college, lived in NJ for three years – which is in what part of the country? – and then I have this hare-brained idea to get out while we’re young and go to study for ministry in … Kentucky.  Kentucky is no NJ.  And you know she had friends and family whispering, “he’s crazy” “preachers are poorly paid!” “you’ll never survive in Kentucky; they have good manners!”  And questions!  “How will you pay?” “How will you adjust?”  “Is this smart?”  But guess what?  Two weeks in, I mean TWO WEEKS IN, she says to me, unprompted, “I LOVE this place.”  And so did I.  Why?  We were there on mission.  We need we had an opportunity to impact people for glory and I’m convinced she was given the power of eternity.  That’s what it’s like.  When you have whispers behind you and questions in front of you, you need eternity inside of you.

Or the woman in her 90s who knew her time on earth was limited.  So she told her family that when her time came she wanted to be cremated and wanted the ashes put in a suitcase to announce to the world that “I am going someplace better.”  Woo hoo!  That’s perspective, that’s power, that’s facing an uncertain future with a certain hope.  When you have whispers behind you and questions in front of you, you need eternity inside of you.

I happen to believe that Xmas is the ultimate cure for life’s myopia.  Myopia, which I have, is when you can only see stuff up close.  Most of us are that way with life.  We see what’s now, what’s next, and what’s near.  That’s why we allow the whispers and the questions to dominate our decision making.  But when you see how Mary endured and who she carried, it was like a new set of lenses.  She got out of now and near and next and began to be able to see there and then and ultimate.  You stop living for the moment – which, face it, is what got you into trouble ever single time! – and began living for the moments this moment will cause.  I’m not talking about being so heavenly minded that you’re no earthly good; I’m reinforcing the reality that those who are the most confident of the next life do the most good in this one.

So, tonight, for all you who are the victims of innuendo or at the mercy of uncertainty … would you invite the power of eternity to take up residence within?  More than that, to assume ownership from the inside out?  It might even start embryonically on this evening and then grow enthusiastically in the next weeks.  Please.  Stop trying to deal with your reputation or your fears on your own strength.  Invite or RE-INVITE the infant Lord who is you resurrected King to take up rich residence in your life, soul, and body. The only way to make history is to have the power of eternity.  Let’s pray  (palms up and open prayer)