I have been going to a local YMCA branch for fitness training for about 16 years now.

I came by it accidentally.  About the time I turned 40, I developed a degenerated disc in my back and tendonitis in my knee, both of which rendered me incapable of either playing tennis or jogging for fitness.  Prior to that onset of middle age (!), I was in the habit of running about two miles a day.

So, desperate to do something that connected me with my past as an athlete, I joined the Y, as I had heard that elliptical machines enabled cardio workouts with the impact of the pavement on back and knee.  So that was my plan: just do some cardio, and then get out of the Y as quickly as possible because (in my mind in 2001), tennis players never do strength training. 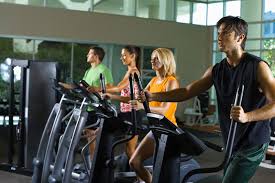 Well, a lot has changed since then, and the routine at the Y has become an indispensable part of my week.   And through the years, I’ve noticed some uncanny parallels between what goes on there and what goes on in most people’s spiritual lives — what we around here call a “living relationship with Jesus Christ.”  Here are five:

1. When you start out, you have no idea what you’re doing.  I remember my first tentative steps to using some of the strength training equipment beyond the elliptical machine.  My #1 goal was not to look like a fool, either by using the equipment incorrectly or by loading such light weights it was obvious I was a weakling.  And that’s the way many people approach their new faith — they feel intimidated that they don’t know the bible, they’re not always sure how to act around church folk, and they are scared to death someone will ask them to read out loud if they come to a small group.  That last one is no joke — I hear it time and time again. (And the answer is “no.”)

2. It takes a guide or two to help you get your sea legs.  In the early years at Y, some very nice people showed me how to have the right form.  They were fit enough that I respected them but not so muscular that I was intimidated.  Most importantly, they were approachable.  In the same way, a living relationship with Jesus Christ involves the spiritual expertise and guiding hand of someone a little farther along the road.  For me, it involved teenage friends, campus ministers, seminary professors, and now clergy colleagues.  For most folks, it will include LifeGroup members and leaders.

3. You meet some surprisingly nice people along the way.  The Y is one of the few places I can go “incognito.”  I’m not always the “preacher at Good Shepherd” there, but more frequently just that guy with his towel who likes his routines.  As a result, I’ve met a cross section of people living at the intersection of Mecklenburg & York Counties.  (And sometimes, when I lift the veil of what I do for a living, some of those people end up at GSUMC!)  Connecting to faith and church is much the same — even the most cynical among us will find a remarkable collection of people in any congregation who are genuinely pursuing Jesus.  I happen to believe Good Shepherd has an unusually high percentage of such folks, but then again, I’m biased.

4. If you want to grow stronger in the muscle groups EVERYONE sees, work on the parts NO ONE sees.  Want to get bigger arms?  Work on your core.  Expand your chest?  Develop your lower back.  Get shoulders that people confuse with those belonging to Dwight Howard?  Work on your glutes.  It’s counter-intuitive but completely accurate — the “visible” muscles (sometimes called the “glory groups”) need the support of the invisible to reach their full potential.  In the same way, if you want to be a person of spiritual serenity, you’ll need to spend plenty of time away and alone — away from people and alone with your Father, reading his word and seeking him in prayer.

5. Once you get the hang of it, you can’t imagine life without it.  I was tentative, fearful, and a little embarrassed in attending the Y in 2001.  In 2017, I can’t imagine life without it.  It brings structure to my week and health to my body.  As an added bonus, the Y is where I work through some of my thorniest sermon dilemmas and where some of my best “bottom lines” come to mind.  And, having been a Christian now for 38 years, I can say the same about life with Christ.  In the early days, I wasn’t sure what I was doing.  In these latter days, it is who I am.