When I say “pilgrims from the Wesleyan world” (pretty nifty to put quotes around something I just said, eh?), I mean not only United Methodists, but Free Methodists, Wesleyans, Nazarenes, Christian & Missionary Alliance-ers, and even soldiers in the Salvation Army.  All those folks just listed trace a good portion of their spiritual heritage to (well, to Jesus first) John Wesley & his emphatic declarations regarding free will, prevenient grace, and holiness of heart and life.

The New Room Conference is sponsored by Seedbed, a publishing group operating under the auspices of Asbury Seminary.  (Speaking of publishing, part of my Tennessee trip involved a morning with my new friends at Abingdon Press who have published Head Scratchers, The Storm Before The Calm, and The Shadow Of A Doubt, but that’s another blog for another day.  Like tomorrow.)

I had two reasons for attending:  1) those of us in the United Methodist Church who wish to conserve historic teaching regarding Christology and Sexology need the encouragement that comes from gathering together in an “angst-free zone” and 2) I was asked to lead a breakout workshop that I entitled Sermons That Pop And Series That Stick.

A few of those 700 Wesleyan-flavored followers of Jesus were from our very own Western North Carolina Conference of the United Methodist Church.  Here’s a picture of most of us: 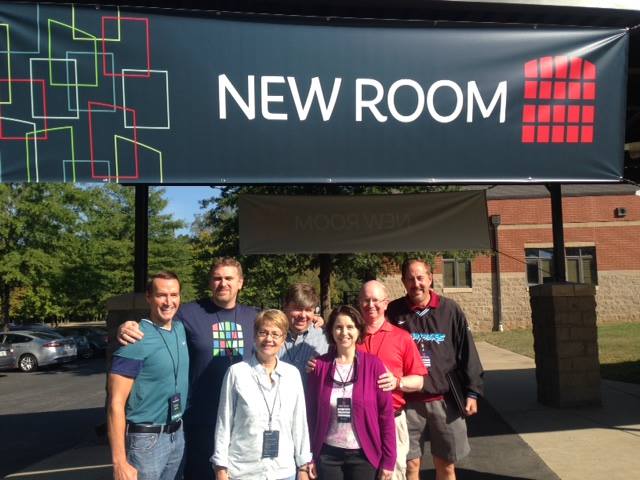 Here are my top five takeaways from the gathering:

1.  There Is An Awesome Power In Shared Beliefs.  Back in the 1990s, the Promise Keepers published a book called The Awesome Power Of Shared Beliefs, and I saw that reality in evidence at New Room. We weren’t there to debate doctrine.  We were there to celebrate divinity.  Our shared affirmations fueled passionate worship and provocative teaching.

2.  It’s A Big Tent But Not A Borderless One.  We came from different denominations & ethnicities, wore different clothing, had different emphases in our ministries . . . yet shared core convictions when it comes to the divinity of Christ, the decisiveness of salvation, and the primacy of holiness.  Our ethnic diversity was the result of theological unity.

3.  Salvation Is Not About “Getting Saved.”  In Wesleyan understanding, coming to faith in Christ is much, much more than a ticket to heaven after you die.  It is instead the beginning of a pathway into a life in which you shed the old nature and “put on” Christ. That’s why we compare the waters of baptism to amniotic fluid at Good Shepherd: the same waters that cleanse also inaugurate new birth.  That understanding is Wesleyan to the core.

5.  People Like The Good Shepherd Story.  In the section of my presentation on “series that stick,” I said that “a sermon series is more than a series of sermons.”  (I actually thought of that on the fly!)  From there I told about the Radical Impact Projects that had their origins in the sermon series of Home, What Child Is This?, and Solutionists.  It’s always a privilege to share with others what the “inviting all people” people of GSUMC have done to free the oppressed and feed the hungry.

6.  What A Blessing To Be “No Respecter Of Persons.”  Throughout the week, I saw a couple of United Methodist bishops.  After the conference, I heard that others had attended as well.  But you know what was so great?  Conference organizers did not bring them on to the platform.  No bishops gave special addresses or welcomes.  They were not treated as “special,” “different,” “honored,” or even “powerful.”  It was Acts 10:34 in real time.  This wasn’t about reinforcing United Methodist hierarchy; it was about reclaiming Kingdom of God priorities.

7. In The Face Of Denominational Uncertainty, Networks Provide Stability.  Who knows where the United Methodist Church will be in 2016 and beyond?  Settled on orthodoxy but filled with anarchy?  Or headed towards heresy amid pleas for unity?  Unlike Isaiah, I can neither see the future nor see from the future.  Yet in the midst of that ambiguity, I am grateful for the stability of a loosely networked tribe of people who transcend the institution I know and love.