On most weekends in the fall, I spend at least some time watching football.

College on Saturday and pro on Sunday.

And this year, it has become crystal clear to me that I enjoy the Saturday experience much more than Sunday.

I’m sure that part of that bias is because given my line of work Sunday viewing is . . . interrupted.  Like most clergy, I need to be back at church on Sunday afternoon for our evening activities.

Yet the reasons are deeper than that.  So here are the Top Five Reasons why I like Saturday football . . . 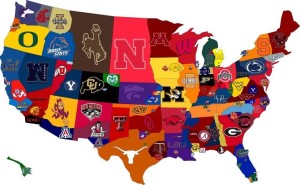 . . . better than its Sunday counterpart 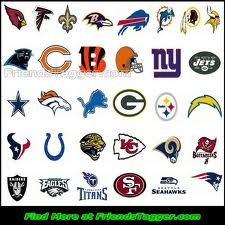 5.  There are so many more games.  Back in the late 60s and early 70s when I first became a football fan, there were regulations that severely limited the number of games that could be televised.  Some of the great classics made it on — Texas’ 15-14 win over Arkansas in 1969 and Nebraska’s 35-31 defeat of Oklahoma in the 1971 “Game Of The Century”  — but most games weren’t on TV.  With the loosening of NCAA rules and the advent of cable, all that has now changed.  Even with a high speed remote, there are more good games televised on a given Saturday night than you can possibly watch.

Not so in college.  Just this year, West Virginia beat Baylor 70-63.  SMU beat Houston 72-24.  As long as you stay away from the Big Ten, you’re almost guaranteed a game with a final score that could come from the realm of college basketball.

3.  The wins are more glorious and the losses are more painful.  The NFL is business, and every big win or tough loss simply means the players show back up on Monday and start game prep all over again.  There’s not such a tough exterior over either success or failure in the college ranks.  This past Saturday, Maryland’s kicker missed a short field goal that would have beaten North Carolina State on the last play of the game, and he was inconsolable afterwards.  In the NFL, he would have just been cut.

2.  Every game matters.  The bowl system sure has its weaknesses, but one of them is NOT the impact on the regular season.  If you’re gunning for a National Championship and you lose a game, well, chances are that your season is ruined.  It makes the stakes higher on even games that seem routine.

1 (tie).  Comebacks are easier.  In college, the game clock stops after every first down.  Not so in the NFL — it has a much tighter three hour window for TV purposes than does college.  Because the clock stops so frequently, teams can mount successful comebacks much easier.  This past Saturday, Ohio State had a miraculous comeback and overtime victory against Purdue that would have been impossible under NFL rules.

1 (tie).  The bands are better.  No Michigan victory is complete without the band playing the fight song afterwards.  Same with Notre Dame and Southern Cal.  Even much-maligned and oft-defeated SMU has a fight song that I taught to my kids.

I can safely say that “Come And Cheer For The Panthers.” will never elicit the same emotions for me as that one does.