I’ve been on a Jars Of Clay binge recently.

Ever since I changed my morning routine away from talk radio and into music while driving to work, Jars Of Clay have been my artists of choice. 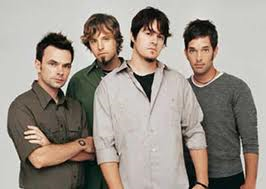 We’ve done a couple of their tunes as worship specials recently, including “Faith Of A Child” during Home Based and then “Inland” to close Sunday’s message for the X-Ray series.

The band has been around and making subtly superb music ever since 1994 when it released its breakthrough debut album.  That particular disc was best known for “Flood,” a song that received airplay on both contemporary Christian and alternative rock stations.

So here they are:  my Top Five Jars Of Clay songs.

5.  Flood & Love Song For A Savior.  Yes, I’m cheating and getting two songs for the price of one.  But the two are the joint centerpieces of that aforementioned debut album.  And though the songs have very different sonic tones, both are terrific pieces of acoustic rock.  One ministry regret: why didn’t I think to have our band play Flood when I preached on drunk, nekkid Noah at the end of The Storm Before The Calm? And one artistic regret:  Jars Of Clay has allowed Love Song For A Savior to be used on ads for the Christian Mingle dating site.

4.  Headphones.  A beautiful description of marital discord.  If that sounds incongruous, it is.  But it’s still gorgeous.

3.  Sunny Days.  The anti-Headphones.  Buoyant, bubbly, brilliant. The optimism in the lyric merges with a bounce in the melody to create a song that is infectious.

2.  Work & Oh My God.  I’m cheating again!  These two tracks hold the Good Monsters album together in the same way Flood & Love Song For A Savior do the debut.  Work is rocked out & radio friendly; Oh My God is haunting & heart breaking.

1.  Inland.  Am I falling victim to “newer is better”?  Or loving a song just because Chris Macedo positively nailed it this past Sunday?  I don’t think so.  Inland hypnotized me the first time I heard it — in concert at Amos’ South End this summer.  And every time I play it during the ride to work (see above), it just gets better and better.