There’s A Reason We Call It A LIBRARY …

Meaning, there’s a reason in addition to the simple truth that the bible is, in fact, a library.

But when you realize it is a library, you are better able to read and interpret it literarily.

I say that in contrast to the age-old and nonsensical question:

Do you interpret the bible literally or symbolically?

That’s like asking if you interpret the local public library literally or symoblically.  Or do you interpet everything at the local Books-A-Million literally or symbolically.  Seen that way, the question is absurd on its face.  You read the different books in the library or the book store according to the style of writing they represent.

Reading Faulker’s novels is a much different experience than reading Deepak Chopra’s self-help  or Stephen Ambrose’s history.  In the same way, you read Genesis 1 or Psalm 8 much differently than you read Exodus 20 or Romans 12.  Careful students of Scripture dig into the words, understand the genre, discover the context and interpret accordingly.

How the different biblical authors use language, diction, and verb tenses matters and matters a lot. 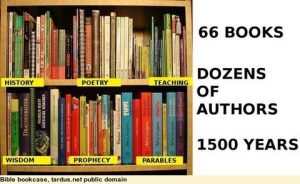 This past Sunday in the Behind The Scenes series from the book of Esther was a case in point.  The book itself — and thus the sermon preached on it — hinges on this critical speech by Esther in 4:15-16:

15 Then Esther sent this reply to Mordecai: 16 “Go, gather together all the Jews who are in Susa, and fast for me. Do not eat or drink for three days, night or day. I and my attendants will fast as you do. When this is done, I will go to the king, even though it is against the law. And if I perish, I perish.”

Why would the whole book pivot at this speech?

Because it is the first time in Esther that the title character is the SUBJECT behind the verbs.  Before this, she had been the object of the verbs of other people.  This is the first time she ACTS.  Previously, she had been acted upon.  The slew of verbs — Go, Gather, Fast,  I Will Go — catapault off the page in a moment of contrast the careful reader can’t help but notice.

It is a moment of linguistic significance and narrative skill that has everything to do with the meaning of the book.

The author’s literary artistry make his point unmistakable:  once Esther acknowledges her Jewishness, she begins to own her story.  Ethnic honesty is the prelude to life control.

And it’s the kind of insight that comes only when you take the time and experience the joy of digging into the bible’s nature as a library full of literary masters.  Who you then interpret literarily.