The Pastoral Sherlock Holmes — Preaching And The Sacred Act Of Noticing

Arthur Conan Doyle’s Sherlock Holmes is one of the most portrayed characters in the history of fiction, film, and stage. Doyle’s four novels and fifty-six short stories involving Scotland Yard’s favorite sleuth have multiplied into hundreds of movies, television programs, and stage productions. Holmes is so ubiquitous that many people believe that this fictional character was in fact a historic figure. No, he was not. Archetypal, perhaps. Composite, most assuredly. Historical, no. 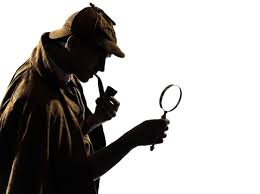 But why such staying power for Sherlock Holmes? What is the source of enduring interest in his character? I believe it is because Holmes could solve the most difficult cases from the smallest of details. Wrinkled carpets, cigar ashes, and water droplets became grist for his mill of exposing and incarcerating London’s criminal element. His tool chest? The magnifying glass. His method? Detailed inspection. The result? His most minute of observations led to the broadest of conclusions.

I want to suggest that those who wish to preach and teach for impact will Sherlock Holmes both congregation and community. Taking a magnifying glass to human behavior, cultural phenomena, and artistic expression, the observant preacher becomes keenly aware that everything is raw material for sermon design, development, and delivery.

Again: everything is raw material.

Yet you can’t include what you don’t first observe.

In that spirit, I am moved by the self-awareness of poet and memoirist Patricia Lockwood. Here’s how she words it in the best-selling Priestdaddy:

I consider myself on an anthropological mission, much like Margaret Mead. I have discovered that this makes almost anything bearable – it would have been such a salvation in my childhood to think I had been sent on a mission to notice. (p. 224)

She’s not the only one sent on the mission of sacred noticing. Preachers, teachers, and leaders do well to don the deerstalker hat, grab the magnifying glass, and join in the sacred act of noticing as an essential part of proclaiming. You can only preach principles when you first notice details.

The Good Company Of Good Noticers

If your proclamation is deeply connected to your observation, you’ll be in good company.

Think of how Jesus preached, for example. What were the primary sources of his preaching material?

Ancient sayings. “You have heard that it was said, ‘Love your neighbor and hate your enemy.’ But I tell you, love you enemies and pray for those who persecute you (Matthew 5:43-44). Jesus knew what “everybody” knew — so that he could then re-cast it into something bold, fresh, and provocative.

Farming Principles. “A farmer went out to sow his seed (Matthew 13:3). And, no doubt, his audience nodded its agreement, the collective thought bubble above reading, “Yes. He knows exactly what my life is like.”

Family Drama. “There was a man who had two sons (Luke 15:11)” and you know that the listeners did not fill in the blanks with “and they all got along well and lived happily ever after.” Jesus knew, from both divine design and earthly observation, how human families turn ordinary relationships into toxic rivalries and how they twist misunderstandings into melodrama. His stories have resonance because they’re based on meticulous observation of what it means to be human and in relationship.

After all, he didn’t say, “Ignore the lilies of the field,” did he? Consider them. Ponder. Reflect. Notice. It’s the sacred act of noticing from the most sacred noticer of them all. As Andy Stanley says, “Jesus took what people knew and used it to explain what they wondered about.”

How I Started Noticing

The preceding was an expert from Simplify The Message; Multiply The Impact, my book on preaching released by Abingdon Press in February.  You can read the rest of the story and get the book here .