The Concert We Missed . . . And Some We Haven’t 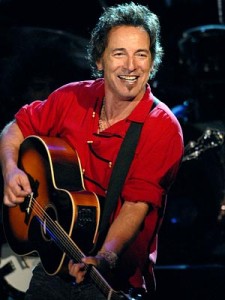 This past Saturday night, we had tickets to see Bruce Springsteen up in Greensboro.

It was all set up to be perfect: the tickets were given to us, I wasn’t preaching on Sunday so I could stay out a bit later than usual on Saturday, and we like Springsteen a lot.

But then Saturday got away from us. Flat tire, First Serve at the church, and the realization that we hadn’t spent any time with our daughter who had just returned home after her sophomore year at college. The thought of two hours up and two hours back became daunting. So we stayed in.

Yet it got me thinking of some concerts we haven’t missed over the last 25 years or so. In no particular order, here are some highlights:

Bruce Springsteen, Lexington, KY, 1988. While waiting in line to buy tickets, we won the lottery system they had in place. So we got front row center seats! He started with “Tunnel Of Love” and the highlight was a passionate version of “She’s The One” — a song I wasn’t even familiar with before that night.

Don Henley, Philadelphia, PA, 1985. This was the first of five times I’ve seen Henley in concert. I kept waiting for him to do “Hotel California”, was convinced he wouldn’t, and then celebrated as he did it as the closing encore. He also did “The Boys Of Summer,” my favorite song ever.

John Mellencamp, Charlotte, 1999. We had just moved to Good Shepherd and somehow got tickets to Verizon for this show. At the time, I didn’t even like Mellencamp very much. Now I do. The concert is the reason why.

Jars Of Clay, Rock Hill, 1997. They played at Winthrop’s basketball stadium. I couldn’t find anyone to go with me, so I took my son Riley, who was five at the time. Even then he loved music. But, as five year olds do, he fell asleep in my lap. Holding on tight to him as Jars did a raucous version “Flood” remains one of my favorite parenting memories of all time.

Rolling Stones, Charlotte, 2005. This was the first event ever in the new Bobcats Arena in uptown Charlotte. I went with Riley — who this time was 13 and most assuredly did not fall asleep in my lap. Highlights: “Miss You,” a song I never liked on vinyl or CD very much but had a new punch that night; “Shattered,” always a great track; and “Brown Sugar” which in spite of the subject matter has the most engaging riff ever. Lowlights: they didn’t do “Gimme Shelter” which is far and away my favorite Stones anthem.