I suspect that all of us in this place have at one time or another heard that phrase So Help Me God come off our lips.  Or we have heard it come out of other people’s mouths.  For sure, anyone who has ever been on jury duty or served as a witness in a court case or a deposition or even been installed into elected office taken your vow with one hand on the bible and the other raised in the air and the phrase so help me God wrapping it all up.

But then others of you, when you were teenagers, and you got home too late one night and you opened the door, turned on the light, and to your horror, there was your dad, awake and in his pajamas with a bathrobe over them.  And in a quiet yet determined voice he says, “So help me God if you ever do that again …”  And in irony of ironies, some of you who heard that as teenagers said it as parents just this week.  To whom? Your teenagers!

And then more of you in all seriousness have uttered Help me God! in those moments of quiet desperation that make up a life.  Before the SAT exam in high school:  hmg.  In advance of the job interview once you got out of college:  hmg.  On behalf of the sick paren:  hmg.  The night you spent in jail with a DUI:  hmg.  Even in the struggle to believe:  hmg.  We hear it from ourselves, we hear it around us, it springs from a place of deep if inconsistent faith, and, depending on the seriousness of the situation and our level of desperation, that cry can be loud.  (Movie clip?)

Which it was towards Jesus in Luke 17.  Luke at how innocently the section begins in 17:11:

11 Now on his way to Jerusalem, Jesus traveled along the border between Samaria and Galilee.

You know what Luke is telling us with the on his way to Jerusalem line?  That Jesus is perfectly executing his own execution.  Since Luke 9 he has been heading resolutely towards the city of his demise; towards the cross itself.  And the cast of characters and crises the he encounters along the way is really Luke’s point in the journey.  Which happens here on this lawless borderland between long-established enemies of the Jews who lived in Galilee and the Samaritans who lived in …..?  Bitter rivals based on ethnicity, religion, and suspicion.

12 As he was going into a village, ten men who had leprosy[a] met him. They stood at a distance

Now: they stood at a distance because they were required by law to do so.  The array of ailments called leprosy runs a larger spectrum that most of us realize.  It may include blemishes, rashes, acne, skin irritants.  But yet the best known is also the more gruesome and quite likely what was going on here:  leprosy in which skin dies and often takes appendages with it.  What we moderns don’t always understand with biblical leprosy is the smell involved.  Rotting flesh … there are few things worse.  And it stunk in ancient times, too. So these ten men have to keep their distance to make sure their disease doesn’t spread and to spare common folk from the stench.  What they have is repulsive and what they are is rejected.

Why loud? Because they had no inside voices!  Not part of their repertoire!  Their Help Me! / Help Us! is loud because there is no other way Jesus could hear at that distance.  And again, what an obvious cry this is.  You may have done it for your skin to clear (Lord knows I did!); they did it for survival.  Help Us Lord!

And Jesus gives the strangest of replies, at least to our ears:

14 When he saw them, he said, “Go, show yourselves to the priests.”

Why go to the priest? Why not the dermatologist?  Well, in those days, the priest did double duty as the de facto doctor and medical examiner and he was the one who had to inspect all the ppl with leprosy to see if healing had indeed occurred.  Total body inspection.  Can I just say that I am grateful for the separation of powers and division of labor in our day?!  But beyond that, this command that Jesus gives displays his incredible confidence in his own power:  you guys, you start on your way because I know by the time you get to the preacher your skin will be Downey fresh.

So they head off in search of a priest.  And on their way, the strangest things begin to happen.  A hand reappeared, tinged with life.  A crutch tripped on a filthy rag as it fell to the ground.  A leg was back, healthy and whole and complete.  Skin cleared.  Stench disappeared.  They raced off, not quite believing that their death sentence had been erased and their rejection rejected.  And I love that they were healed as they went not while they lingered.  God does his greatest work, it seems, while we are most active in our waiting.  You’ll never have it all together, so you might as well get busy and trust that God will help you get along as you go along.

15 One of them, when he saw he was healed, came back, praising God in a loud voice.

Look at the commonality!  Loud voice!  It’s not by accident because Luke is no accidental writer; he’s a verifiable genius!  There’s more of that on display at 17:16:

16 He threw himself at Jesus’ feet and thanked him—and he was a Samaritan.

And there’s a punch line in the story – a Samaritan.  In our day, it would read and he was in ISIS or he was illegal or he’s the ex son-in-law who no way in the world is welcome at your Thanksgiving dinner.  He is the outsider who is doubly rejected as both leper & Sam.  He is beyond help.  Which is probably how you have felt a time or two in your life … as if your situation or your predicament or just yourself was beyond help.  So the beyond help guy gets help and he comes back and his way of saying thank you is loud and it is long.

And then the story turns dark.  Confronted by this one sweet-smelling guy, Jesus asks three straight questions in 17:17-18:

17 Jesus asked, “Were not all ten cleansed? Where are the other nine? 18 Has no one returned to give praise to God except this foreigner?”

Where are the other nine?  Ten healed and there’s only one here and he’s a foreigner! Where are the nine?  Only one of them balanced the ‘So Help Me God!’ with a ‘Thank You Lord!’  Just one.  Which leads to the curious closing line of the scene in 17:19:

READ.  Ah, so ten might have been healed but it looks like only one was truly delivered.  Ten might be better but only one was truly well.  Ten made clean but only one made whole and the evidence of that is in the gratitude.  And it’s the repeating LOUD VOICE (not by accident!) that carries the day.  Who knows?  Maybe the blasé response of the nine suggests that their disease will return while the gratitude of the one sustains his healing.  Here it is:  Real healing comes when yourThank You Lord!’ is as loud as your ‘Help Me God!’  Yep.  When your gratitude is as intense as your desperation.  When your thanks is as epic as your plea.  That’s the liberating power of gratitude that I don’t want anyone here to miss out on.

What I’m talking about is like these folks:  photo montage of people coming out of baptismal waters, ecstatic. 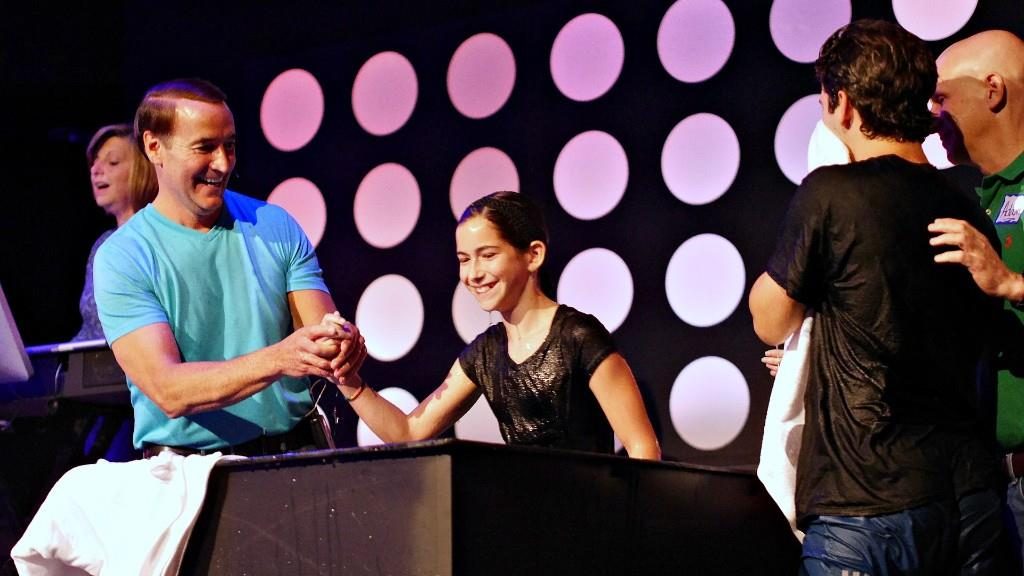 That’s what it’s like.  Real healing comes when you ‘Thank You Lord!’ is as loud as your ‘Help Me God!’

Or it’s even what I’m thinking of with this:

Know what that is?  How many times have you texted it just this week?  But notice: we always do in on our cell phones (small) and in lower caps (smaller).  I believe what God invites us to is more like this:

Where the object of our gratitude (God) is unmistakable and the volume of our thanks is unmissable.  Because we know that having our post-blessing gratitude match the intensity of our pre-blessing desperation is the best way to ensure not just our healing & blessing, but our very deliverance and salvation.  Real healing comes when your ‘Thank You Lord!’ is as loud as your ‘Help Me God!’

What I’m talking about is gratitude as both a posture and a practice.  Posture, meaning, I realize what a wreck I am without Jesus, how I have been rescued in him, and how I am going to take time daily to express that.  When you realize you are powerless, your gratitude becomes limitless.  Gratitude as a posture ensures that you don’t develop the worst attitude of them all:  entitlement.  Real healing comes when your ‘Thank You Lord!’ is as loud as your ‘Help Me God!’

But it’s also a practice.  See, real gratitude, as I’ve heard, is neither invisible nor silent.

Or: unexpressed gratitude is better known as ingratitude.

Yes, give it.  It’s not always easy, it’s not always convenient (though, come one, online giving makes it so!) but it is tangible. It is a God-ordained way of expressing gratitude.  I know I can never pay back what your blood cost, but I can pay forward so that the next guy or next girl will hear that same news.

Did you notice how the one man with leprosy who returned, actually returned?  We don’t know if he ever made it to the priest to be declared healed or not. We just know that his exuberance and gratitude was so overwhelming that he stopped what he was doing, turned around, and gave thanks.  Loudly.  Every bit as loudly as he had asked for help in the first place.  Real healing comes when your ‘Thank You Lord!’ is as loud as your ‘Help Me God!’

Because remember how I saw gratitude is never invisible nor silent?  Which returns us to that haunting question:  where are the other nine?  Oh, the other nine are both invisible AND silent … and maybe not quite as healed as they though.  Their SO HELP ME GOD was loud. Their THANK YOU LORD was silent.  Which are you?  One of the nine?  Or the one?