This is “Team Texas” from the National Intersectional Championships held on the campus of TCU in Fort Worth, Texas, in July of 1979 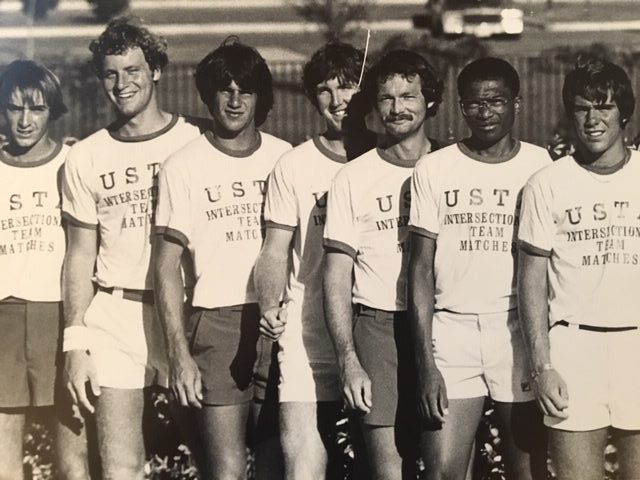 There I am on the far left, looking younger and skinnier and shorter than all the others.  Because I was.  Nevertheless, after some miraculous early summer results, I actually played #1 on this team.  The format of the tournament involved teams from different regions (we called them “sections) of the country playing against each other — so I know we played the Western Section and the Middle Atlantic Section among others.

Erck, Kardon, and Crozier all went on to play for the Unviersity of Texas that next fall.  Kardon has had the most notable career in the sport, having first played professionally and then gone on to great success as a coach, working with Martina Navratilova, Ana Ivanovic, and Coco Vandeweghe among others.

Kelvin Belcher played for Jackson State and Texas Southern and he, too, played several years on the pro tour.  He later became a physician.  I found out while putting this post together that he died while playing a round of golf back in 2017.  David Wilson of San Antonio was a vintage serve-and-volley player who rarely wasted much time in long groundstroke rallies.  Now that I look at the photo, that may well describe all of us from that summer of 79.

I don’t remember how our team did in this tournament … which tells me we didn’t win it.