This is my grandmother on my dad’s side! 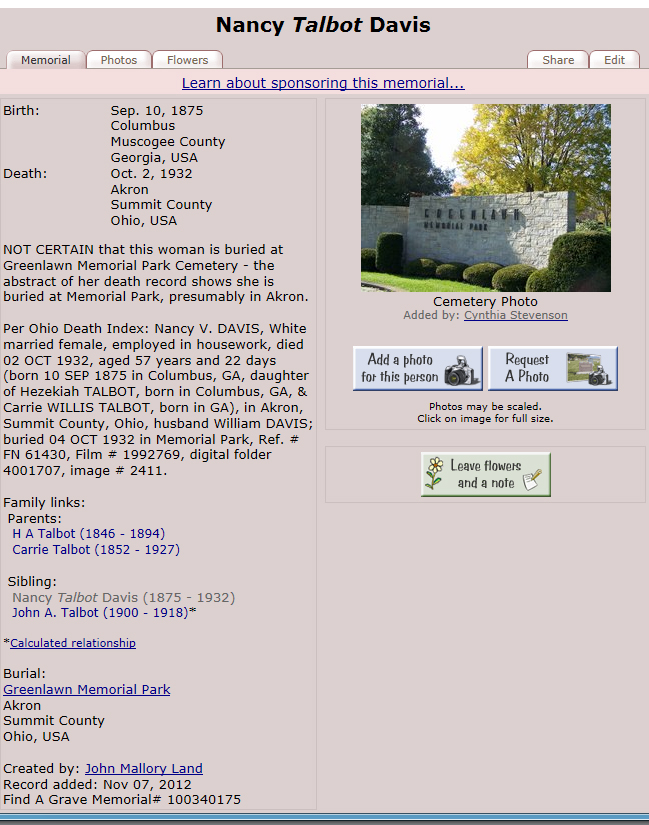 A few interesting things about this notice, her name, and the migration of my dad’s family:

1. Her maiden name was Nancy Virginia Talbot.  People often ask me where my name came from.  While I sometimes answer, “I’m the eighth of eight kids and by that time my parents had run out of normal names,” the real answer is simpler: my paternal grandmother.  I have an older sister named Nancy and an older sister named Virginia.  For #8, my family decided to make a last name into a first.

2. Notice she was born in south Georgia ten years after the Civil War ended.  My father was born in Alabama in 1911.  Shortly thereafter, the family migrated to Akron, Ohio in search of the then-plentiful jobs in the rubber industry.  Rightly or wrongly, I’ve always imagined them as one of those hardscrabble families from a William Faulkner novel.

3. Because he was Alabama-born but Akron-bred, my dad grew up thinking that soot-saturated air was the norm.  He told me once that the first time he ever went to Texas he decided he would settle there because he’d never seen such a blue sky before.  Imagine if he’d come to Carolina!

4. Because Nancy Virginia Talbot Davis died in 1932, no one in our family aside from my dad knew her.