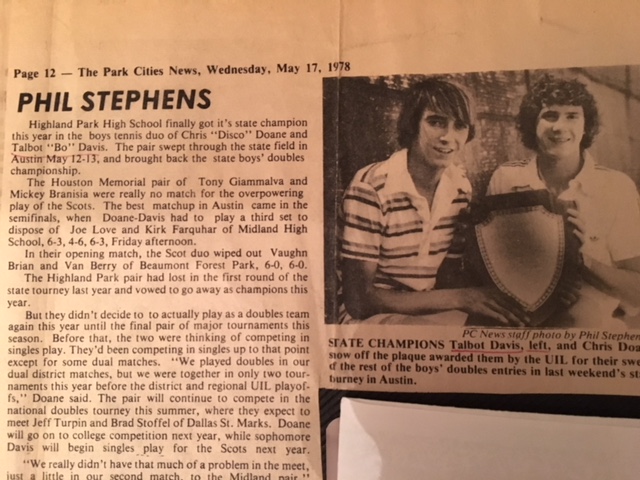 The photo and the accompanying story came in the aftermath of a Texas high school doubles state championship that Chris Doane and I won on behalf of Highland Park High School in Dallas.

He was a senior, I was a sophomore, and during that spring season of  high school tennis, we both put aside our singles games to compete as a doubles team.  Our HP coach broached the idea with us, we both resisted, and then agreed with some reluctance.

It turned out to be a very good idea — and neither of our singles games suffered, either.

The state high school tournament took place on the courts of the University of Texas in Austin, which in those days was in the shadow of UT’s mammoth football stadium.  These days, that football venue is called the Darrell Royal Stadium and has dramatically increased in size, swallowing up the old courts.  That’s the fate of non-revenue sports, I guess.  UT still plays tennis — and well — but the courts relocated to another part of Austin to make room for Bevo and Longhorn football.

The article claims that we beat Tony Giammalva and Mickey Branisa, a team from Houston Memorial High, in the finals.  Now that would have been an accomplishment because in 1978 Tony Giammalva was playing for Trinity University in San Antonio.  The actual team consisted of Tony’s younger brother Sammy, who partnered Mickey Branisa.

At the time, Sammy was only a freshman.  He went on to be a very good pro player, ranked as high as #33 in the world.  The good news is that I have retired from tennis with a 5-0 record against him … it helps to beat players when they are young and before they get great.

Chris and I both had good serves and volleys and while nobody ever called us consistent from the backcourt, we made a good doubles team.

He went on the next year to play for TCU  in Fort Worth, Texas.  We lost touch through the years, and I recently found out that he died of a sudden brain aneurysm about 10 years ago.

That’s the way it is with most throwbacks: there’s always some melancholy in the midst of the nostalgia.