This photo appeared in the August 19, 1984 edition of The Trentonian newspaper.  The story accompanying the pictures describes the only pro tennis tournament I ever won: the James E. Cryan Memorial. 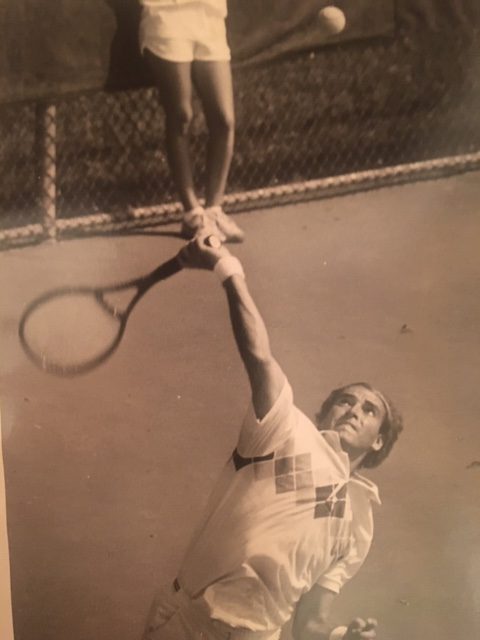 The prize for that professional tennis tournament?  $400.  Combined with a couple of other prize money tournaments I played that year where I won money for getting to the semi-finals, I think my career earnings are $550.

You know how you can tell it’s a pro tournament?  You can see the devoted ball person standing against the fence.  Big time!

A couple of other things to note.  This was the summer after college graduation, and Julie and I were newlyweds living right there in central New Jersey.  We used the prize money to buy a couch for our apartment.

I was teaching tennis at a local club that summer, and some combination of no team pressure PLUS a racket in my hand all day resulted in me playing better the six months after college than I ever had in college.

In the finals of the Cryan, I beat John Bartos who was a couple of years behind me at Princeton.  We both wore the snazzy Ivan Lendl-inspired argyle shirts you see in the photo.

The match was broadcast on a local cable access channel in central Jersey, and a YouTube version of it exists.  If you can bear the nine minute warm up, you can watch it, complete with commentary, here.

This is a first serve (you can see the ball for the second serve in my left pocket).  I can’t tell if it will be a flat or a slice, but I can tell I’m keeping my eyes on the ball.  The racket was the late, great Rossignol F-100, a small-headed frame that suited my game very well.  In fact, I still have a few laying around the house.

The Cryan tournament still exists and these days the winner receives $1,000.  Wondering if I should pull out the old Rossignol, head up to New Jersey, and take my chances.