Princeton & The Pain Of Prevenient Grace

In yesterday’s post, I had the nerve to ask whether a degree from Princeton University (or any other “elite” school for that matter) is more of a burden than a blessing.

In case you’re curious, here I am as a college sophomore in backhand mode playing a match against Brown.  I won that day. You don’t think I’d post a photo of a LOSING match, do you? 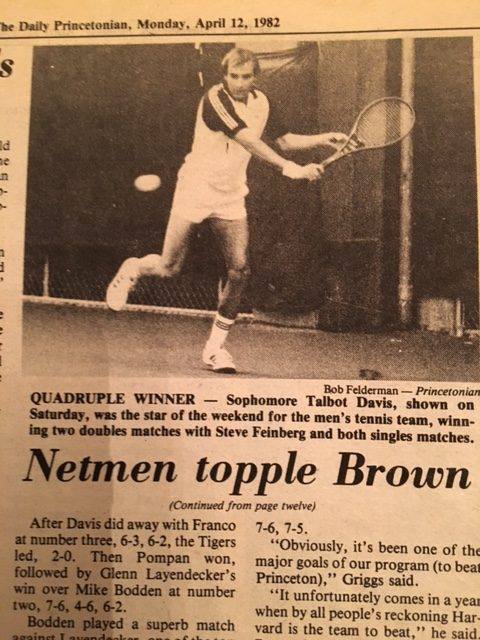 Although yesterday’s question admittedly takes a jaundiced view of something that is an enormous privilege, it resonated with more than a few people over on Facebook.  In the words of a Harvard graduate:

“Thanks for – once again – putting in words the thoughts that go through many heads, including mine.”

So, to answer the original question:  how does one best navigate the expectations that arise from that educational pedigree?  How can you feel like you are anything other than a disappointment unless you’re a CEO, an elected official, a Nobel-Prize winning researcher, or the pastor of the most happening church in the world?

I can’t answer for everyone, of course.  I can only answer from my experience, which is this:  I didn’t really want to go to there.  I didn’t exactly love it while I was there.  And I am convinced from hindsight that God masterplanned all of it to set me up for the rest of my life.

The reason behind my reluctance to go to Princeton in the first place had everything to do with the two Ts:  Texas and Tennis.  Throughout my teenage years, I wanted to go  Trinity University in San Antonio, become part of their historic tennis legacy, and try the pro tour four years later.  But family wisdom weighed in — as in, “you can’t turn an Ivy League opportunity down!”  Even more powerful was what happened when I prayed.  Now: I was relatively new to faith and to prayer at that time, but every time I knelt to pray, “Lord, where should I go to college?,” I couldn’t even finish the sentence before the answer came to my head:  Princeton.

So I’d give God another chance:  “Lord, I’m serious this time. Where should I go?  And before you answer, remember how much I love Trinity.”

“Lord, it’s in New Jersey.  Have you ever BEEN to New Jersey?”

That sort of clarity in prayer — telling me emphatically what I DID NOT WANT TO HEAR  — has only happened once or twice in my life.  One of the other times was late in 1994 when I had the chance to leave Mt. Carmel Church in Monroe for what looked like a golden opportunity in suburban Charlotte.  The answer before I could finish my question?  STAY.  So stay I did, until 1999.

So if God tells you no uncertain terms to go somewhere, that means you’ll love it, right?  Not so fast.  For a native Texan, Princeton was serious culture shock: cold weather, long lines, and, um, abrupt people.  Some of it I endured, some of it I came to love (tennis teammates in particular), and for much of it I was never going to feel completely at home.

But in spite of my reluctance and even in spite of the fact that I have mixed feelings about my four years there, leaving Texas and trekking to New Jersey set up my whole life.  Forces were at work directing me there, keeping me there, preparing me there.

It’s where I met Julie.

It’s where I heard the call to ministry.

It’s where I first of Asbury Seminary.

It’s where I learned to have confidence as a writer, paving the way for this new-found privilege I have in publishing.

All in all, I see unmistakable evidence of God’s providence throughout — he put people and situations and events in my path, all designed to invite me into the kind of life that prepared me to serve alongside the people of Good Shepherd.

God was working on me before I was looking for him.

He was showing me that success in the world’s eyes is less important than significance in his.

In Methodism, we call that prevenient grace — the love, provision, and direction that goes BEFORE you, wooing you towards God when you’re often looking the other way.

What encourages me about the reflections on my own journey is this:  situations and decisions that seem unpleasant or difficult in the moment — Lord, have you ever BEEN to New Jersey? — are nothing but the raw material God uses to get you ready you for his future.

It’s prevenient grace and it shows me that life’s pain isn’t God’s punishment.