As you can tell from looking at the “Books I Like” column to the right, I recently read Doris Kearns Goodwin’s No Ordinary Time: Franklin and Eleanor Roosevelt & The Home Front In World War II. 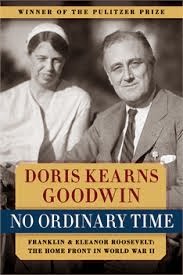 The book fascinates on many levels, but most especially in its portrayal of the deeply loving yet painfully awkward marriage of Franklin and Eleanor. They were rarely together, they both engaged in extra-marital relationships that likely would have ended his presidency in this internet & cell phone age, and yet through it all they had a shared forcefulness unmatched in our political history.

And in that vein, I was struck by the kinds of women with whom FDR surrounded himself during Eleanor’s many absences: younger beauties who delighted in his stories, laughed at his jokes, and didn’t discuss public policy while drinking private cocktails. You couldn’t say any of those things about Eleanor.

But as I was reading, I jotted this down:

FDR would rather be SEEN and ADORED than to be KNOWN and LOVED.

Being seen and adored requires a public persona and a personal charisma.  FDR had both in abundance.


Being known and loved requires vulnerability, honesty, and the frequent need to ask for forgiveness.  Goodwin’s book suggests those qualities weren’t part of the Roosevelts’ vocabulary, much less their marriage.

Seen from a distance and adored for a performance.

Or known intimately and loved anyway.

I think those of us in pastoral ministry can all too easily opt for the adrenaline rush that comes from being observed and affirmed.

It takes a lot more work and a good deal more integrity to allow people to know us, to acknowledge our struggles, and finally to permit them to love us because of our flaws and not in spite of them.

I know that given a choice, my natural inclination would be to adopt a persona and seek to be seen and not known, admired and not loved.  I believe Paul would call that living “in the flesh.”

But by living “in the Spirit,” that same Spirit is moving me slowly but surely out of performance and into relationship.

Because although I am pastor and not president,  I don’t want my legacy to be one of painful awkwardness in the most important relationships of my life.