READ Proverbs 24:16 out loud & together to begin

for though the righteous fall seven times, they rise again,
but the wicked stumble when calamity strikes.

The world is really divided into two groups of people when you think about it. Those who GET UP and those who GIVE UP (signs behind me a la before). And the reason it’s divided between GET UPPERS and GIVE UPPERS is because ALL OF US are FALLERS. That’s one thing we all have in common; not just the elderly in the TV commercials who have fallen and can’t get up. I mean we see what I mean right here in Proverbs 24:16 where the distinction is NOT between those who fall and those who stand – BECAUSE WE ALL FALL! – but between, as I said, the get uppers and give uppers. Because we all fall, we all fail, often compeletely.

Now: sometimes we’re PUSHED when we fall. You know what I’m saying. It’s the failure you have or the failure you feel and it really is at the hands of someone else. It’s the bigger kid who bullied you when you were in school. It’s the parent who abused you behind closed doors while living for Jesus in front of them. It’s the spouse who left you. It’s the co-worker who out-maneuvered you, the job that disappointed you. It’s even the teacher who seemed to conspire against you. It’s the friend who kept insisting you go out drinking with him – only he could handle his booze and you can’t. And each of those situations, whether with your relationships or your mental health or your profession or your spiritual life, you feel like a failure. And for a lot of you what I’m talking about is not some distant memory; it’s in the here and the now. You’ve fallen, you were pushed, and even though someone else caused it (mostly) the feelings of failure, even complete failure, don’t escape you.

But for others of you, it’s more acute because you weren’t PUSHED. You TRIPPED. Over your own two feet. Or you jumped, all of your own volition. Your fall is nobody’s fault but yours. You’re the one who wrecked the marriage and now no matter how bad you want it, you can’t get it back. You’re the one who lost the dream job. You’re the one who keeps failing the class. Or you’re the one who FINALLY stops the drinking, the porn clicking, the compulsive shopping, and then what do they call it? You fell OFF THE WAGON. Nobody forced you; you just did it. And whatever sobriety you had built up feels gone with the wind, and failure isn’t an event right now, it feels like a person.

And then, and then, I know so many of you – because you tell me – you feel liked you’ve tried Xtny but then couldn’t stick with it. Church, a little; a living relationship, not so much. You don’t really feel deserving of the name Xn. Failure feels so complete. And while I don’t quite identify with that last one, I know that AS A PASTOR, I have made decisions in the past that seemed in the short run so painful I didn’t know if I could ever recover. And even while at a church I loved I felt like a complete failure … like I needed a job in landscaping or tennis teaching or whatever.

And – and get this for the purposes of the series – I’ve noticed that this stuff runs in families. Not the falling – that’s everyone – but the reaction to it. Give uppers begat give uppers. And get uppers begat get uppers. Resilience, they call it in the social services world and I know 100% for sure that its presence or its absence is genetic and inherited or both.
So: how? How, not only in our lives but in the lives of those we influence, the generation behind us, can we become get uppers? And even if we by nature do a pretty good job of getting up, how can we make sense of all the falling? The failing? How do we make sure we’re not complete and total failures?

Well, take it back to Proverbs 24:16: READ. A-ha! That makes it abundantly clear that resilience isn’t something you discover in the chaos; it’s something you develop in the calm. Resilience isn’t the goal; it’s the result of the goal, being “godly” or what we call a living relationship with Jesus Christ. But you couple that beautiful truth with this even more counter-intuitive one in James 1:2-4:

2 Consider it pure joy, my brothers and sisters,[a] whenever you face trials of many kinds, 3 because you know that the testing of your faith produces perseverance. 4 Let perseverance finish its work so that you may be mature and complete, not lacking anything.

You know why I am giving this message in this series? Because a lot of you parents and grandparents are LAWN MOWERING your children. What’s that? (AV of lawn mow row). It’s this. You see it as your role to smooth the path, to prepare the way, to ensure that your child gets to walk through on blades of grass nicely mowed and trimmed. No weeds, no sticks, no snakes! You see it as your role to prevent adversity in their lives. It’s why you ensure that everyone on the team or in the league gets a trophy (I even heard of one team recently that got RINGS … like Super Bowl RINGS!), it’s why you side with your child in the dispute with the teacher or principal, it’s why you hover, hover, hover. You engineer success, avoid failure on your child’s behalf and WITH THE BEST OF INTENTIONS do the worst kind of damage.

As if your kids and my kids couldn’t learn more through failure and struggle. As if adversity isn’t fertile ground for maturity. Here’s a photo of me at 12, losing a tennis match to my arch rival, a kid named Brad Stoffel (AV). 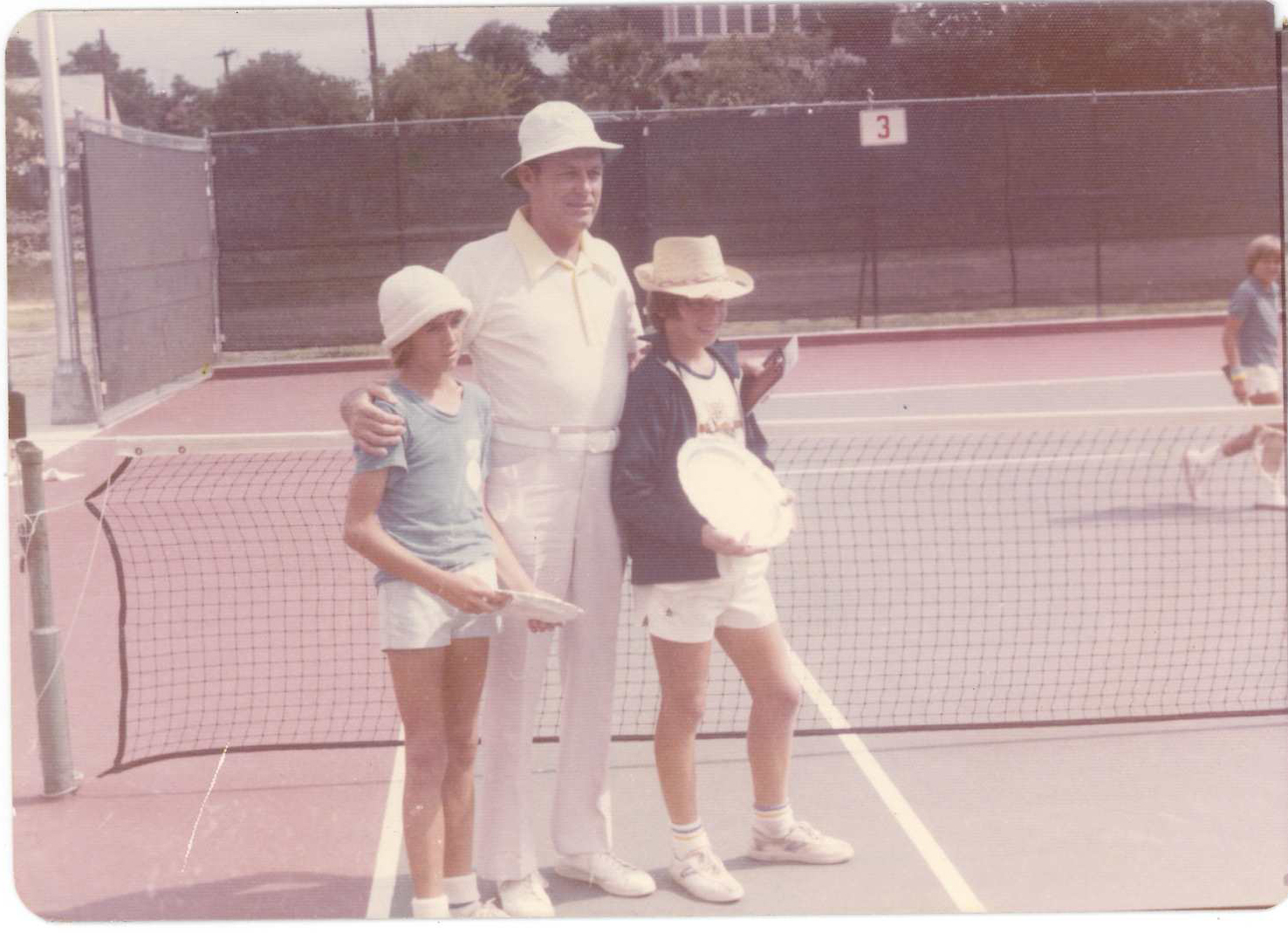 You probably can’t see the misery etched in my face, for that match made him #1 in Texas for 12 year olds and me #2. The other thing you don’t know is that that was at the start of a 15 match losing streak to Brad, and most of those matches resulted in three things: 1) he stayed #1 in Texas and 2) I cried and 3) I vowed to quite tennis. Tears and Texas, tears and Texas. But I tell you that because my Dad was there for almost every one of those 15 matches. And it would have been SO tempting for him to echo my vow to quit and say, “You know, this is hard on me, too. How about we try a new sport? Can I tell you about NASCAR?  How about competitive hunting?”

But none of that. Instead, it was this very quiet, quite resilient, “when you get older you’ll beat him and wonder how you ever lost to him.” Well guess what? Nobody beats Talbot Davis SIXTEEN TIMES IN A ROW! 15, yes, 16, absolutely not! But here’s the deal: the lessons I learned in that whole episode – which was the dominant narrative of my adolescence – have stuck. And when I’m tempted to give up instead of get up, when I am convinced that this church will never recover from my ineptitude, I remember that what it is that runs in my family: You CAN’T be a complete failure when you know failure completes you. I just want it to run in yours.

And this may sound corny, may be cliché, but I’m convinced this is at least some of the value of sports in the lives of your kids. If they’re not wired that way, it’s the value of art. The value of music. The value of competition. The kind of competition they may well lose. Whatever the situation is, don’t lawn mower a smooth ride. Don’t protect. Instill it in their mind, in the midst of their tears, when they’re convinced failure is not an event but it is their person:  You CAN’T be a complete failure when you know failure completes you.

So: which is it for you? A fall in which you tripped? Or into which you were pushed? Some of both? Think about Proverbs 24:16; in fact let’s say it together again: READ. What if you’d stopped at SIX? What if #6 was the time you’d given up? You’ll never know how complete you could have been!
Have you lost sobriety recently?  You CAN’T be a complete failure when you know failure completes you.

Have you failed a class?  You CAN’T be a complete failure when you know failure completes you.

Have you wrecked a car?  You CAN’T be a complete failure when you know failure completes you.

Have you lost a friendship?  You CAN’T be a complete failure when you know failure completes you.

Have you been unsteady in your faith, sort of sketchy in the daily discipline it takes to have a living relationship with Jesus?  You CAN’T be a complete failure when you know failure completes you.

Have you blown it with your kids, lost that temper you’d vowed to hold? You CAN’T be a complete failure when you know failure completes you.

Teenagers within my voice: is the anxiety so heavy you’ve wondered if you can even show up to school next week?  You CAN’T be a complete failure when you know failure completes you.

And do you know why I get a little worked up over this? Why I believe it’s not on the margins of faith but at the center of it? Where was our Savior? He was PUSHED – crucified, technically – he did NOT TRIP, but he fell down. Dead down. That’s complete failure! What if he’d given up after two days?! But he didn’t! Hallelujah, he didn’t! You can’t keep him down! Let THAT grave busting, failure beating power belong to you and your household today.