In introducing the Not A Fan series, we wanted to give the people of the church some concrete next steps.  After all, what’s the point of getting people motivated on a Sunday with no tangible way to respond on Monday?

And in particular, I wanted to offer a great next step to supplement the message from this past Sunday, which had this line as its refrain:  Jesus doesn’t want you to admire him.  He wants you to pursue him.

So how could we give Good Shepherdites a tangible way to pursue the Lord?

Voila!  The Reveal class — billed as a “reintroduction to the library we call the bible.”

And last night, the plan came to fruition as upwards of 70 people gathered at our Corner Campus to experience the passionate biblical wisdom of James-Michael Smith. 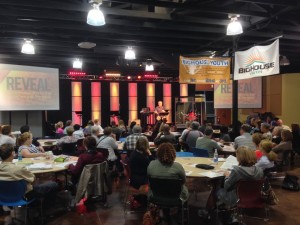 About ten minutes into the class, I received a text message from someone who was in the room.  Here’s what it said:

James-Michael said, “If you’ve been at Good Shepherd for at least one sermon, you’ve heard Talbot say that the bible is not a book, it’s a . . . . . ” and everybody said in unison said “LIBRARY!”

At least they’re listening.  To sermons and to plans.