How To Make 2,000 Shoe Boxes Disappear

1.  Decide on a ridiculous goal for a church — 2,000 Operation Christmas Child shoe boxes to be prepared, filled, and sent around the world in cooperation with Samaritan’s Purse.

2.  On Saturday morning, have First Serve weekend teams assemble and display empty shoe boxes in the front of the Worship Center. 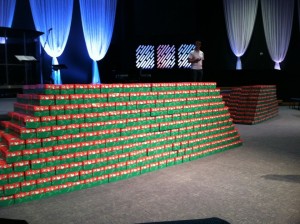 3.  Arrange to have Ted speak at all three Sunday worship gatherings.  Ted was born in the former Soviet Union, named Vladimir at his birth, and as the USSR and his nuclear family both collapsed in the early 1990s, moved to an orphanage.  In 1999, when Vladimir/Ted was about twelve years old, his orphanage received a shipment of Operation Christmas Child shoe boxes.  It was the first time Ted knew what it meant to be loved by people he hadn’t even met.  Several years later, Ted was adopted by a family in Minnesota.  As it turned out, that same family had packed shoe boxes in 1999.  Could it be that the box Ted opened in a Russian orphanage was packed by his adoptive parents?  Only God knows.  In becoming part of that Minnesota family, Ted also joined a much larger family: the Body of Christ.  Ted learned to speak stellar English, began ministering with Operation Christmas Child, and joined the “Full Circle” speaking team that motivates US churches to set and achieve ridiculous shoe box goals.  Ted’s talk was witty, insightful, heart-rending, and tear-inducing.

4.  Move all children’s programming for pre-schoolers and older out of the regular K-Zone environment and into the Worship Center — so that kids can hear Ted’s story first hand and “encourage” their parents to become deeply involved with and invested in Operation Christmas Child.

5.  Tell people we’re hoping to have all the boxes on display at the beginning of the 8:30 service gone by the conclusion of the 11:30 service.

6.  Invite people at all three services to come forward during the singing of the morning’s final song — A New Hallelujah — and pick up one, two, five, or ten boxes per household.  Remind them that all empty boxes that leave the church on November 4 need to be filled and returned by November 18.

7.  Watch with gratitude as the generous people of Good Shepherd respond to an absurd challenge.  Again. 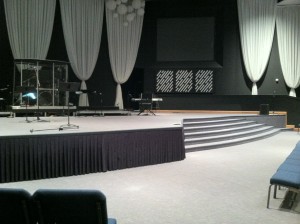 9.  Thank God for the news we have to share about Christ, the way we can share it with shoe boxes, and the kind of people I get to go to church with at Good Shepherd.

(If you weren’t able to be there yesterday but would like to take part in our effort, check here for instructions.)