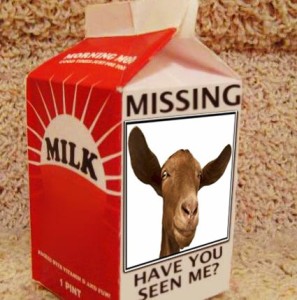 While I’m not on Facebook, I have an awareness of its power.

So at the end of yesterday’s message — based on the connections between Leviticus 16, John 19, and Hebrews 10 and with the Rob Bell-inspired refrain “the goat has left the building” — I invited the people of the church to post as their Facebook status:

And they did. Some did it right there in church on their mobile devices; other, less technologically mobile folks, posted on their home computers after church.

Perhaps the most creative is John Pavlovitz’s status in the milk carton photo.

But as is typical of Facebook, the status postings started cyber-conversations with hundreds of people who hadn’t been to Good Shepherd on Sunday morning. Here are a couple of responses:

You are the second person I’ve seen without a goat today. Goats must be on the loose everywhere!

I give up…what are you speaking of?

Where is this from. It’s on everyone’s Status

Now it makes sense! Hang with me for a moment…

The movie, ‘Men Who Stare at Goats’ was about the shame and guilt they had about the way goats were used in experiments. In the end they set the goats (captives) free. The same is true for us…but a little in reverse… Christ as the “scapegoat” took on the sins of the world to set us (captives) free – so we would no longer live with shame and guilt 🙂

And I love the way this mini-phenomenon empowered the people of Good Shepherd to offer explanations to their friends. Take a look at this conversation:

I give up…what are you speaking of?

Thank you for asking! In Old Testament days, the law was to bring in a goat as a sin offering. The high priest laid hands on the goat to put all the people’s sins on the goat. The goat was then led out of town to the desert away from the people to take away their sins for the year. The ceremony was repeated every year at Yom Kipper. Leviticus 16:3-10; 20-22

You can hear the sermon itself here.