#ForCLT Finale — The “For The Church” Sermon Rewind

It was probably 15 years ago now, and I was at the local YMCA one day, minding my own business and doing my own little exercise routine.  But while there, I couldn’t help but overhear a woman nearby talking to her friend.  I suppose they fit an exercise or two in between the talking, but the talking was what really interested me.  Because my YMCA “friend” was talking about … her CHURCH.  And I was like, “well, if she’s gonna talk about her church, I might as well listen.”  So I did.

And she RAILED against that place.  The people, the leadership, the history, the vibe.  Bad decisions made by poor leadership resulting in painful splits.  The idea of an “edit button” seemed kind of foreign to her, even in this public place of the YMCA.  And as she kept going on and on about her church, I thought two things:  1)  thank GOD she’s not talking about Good Shepherd; and 2) does she know anything about your INSIDE VOICE?  But here she was, talking about church & the mess it’s in and you know what I was doing?  EAVESDROPPING.  Listening in on a conversation other people were having about church.

And in a sense that’s what ALL of us get to do today with John 17.  Eavesdrop on a conversation about church.  See, people make a big mistake in reading and then teaching on John 17 when they view it as a series of commands.  It’s not.  It’s not EXHORTATION; it’s EAVESDROPPING.  There’s no “THOU SHALTS” or “THOU SHALT NOT”s here; it’s a prayer and we overhear it, which sort of has everything to do with how we understand it.  Not eavesdropping at the Y but in the holy of holies.

Now: this conversation we eavesdrop on raises a question that I can’t fully answer:  why and how it is that God has a conversation with himself.  Because John 17 has Jesus praying to the Father and yet this same Gospel has already told us more than once that Jesus and the Father are one.  They’re one and they’re not the same; there is the Community Of One.  So how prayer happens, WHY prayer happens is at some level beyond my comprehension.  It happens.  And if nothing else, we know that as a community the church is a people for whom Jesus prays.  Not just this eavesdropped prayer in Jn 17 but as the book of Hebrews tells us, continually ever since.  And what does Jesus pray for when he prays for the church?  “Lord, make sure their preachers all have jets!”  “Lord, make sure their singers all get recording contracts!”  “Lord, let them know the truth so the truth will send them on a Conference Circuit?”  Not exactly.

“I am coming to you now, but I say these things while I am still in the world, so that they may have the full measure of my joy within them.

Now these first few verses are Jesus’ prayer specifically for his original 12 disciples.  Including Judas!  Praying for Judas!  But look at what he prays for there – that they would have his joy.  I love that.  It shows us that whatever joy we have is TRANSPLANTED joy, not generated joy.  We can’t conjure up a joyful attitude; Jesus can only transplant his joy into our souls.  Kinda cool.  Next, look at 17:14-15:

Oh my gosh.  The world – by world there, it means human society organized without God … IOW, Hollywood, media, higher education! … is going to hate Christians and hate the church.  No different than how it felt about Jesus himself.  It’s so funny: the church’s temptation in the face of the world’s hatred is to somehow alter its message to make it more acceptable.  Soften it.  Jesus is NOT the Son of God, just the actualization of the ideal human.  Hell is NOT real because we all know we go through hell on earth.  Marriage is NOT for a man and a woman but just for two people (for now) who love each other.  Listen: when the church modifies the Word to satisfy the world, it doesn’t win new converts. It just earns more contempt.

Oh, tuck that away.  He is praying that his first followers will be odd and strange, and this world will be an ill-fitting suit for them. It’s almost like Jesus prays his followers will be aliens from another realm while on earth.  Well, then the praying turns at 17:20: 20 “My prayer is not for them alone. I pray also for those who will believe in me through their message,

that all of them may be one, Father, just as you are in me and I am in you. May they also be in us so that the world may believe that you have sent me.

Ah, the kind of union and unity that reflects this mystery of what is going on with the Father and the Son.

Now: notice Jesus does NOT pray we’ll be united; instead, that we will have unity.  See, you can tie two chickens together by the legs, through them over a  clothesline and those two chickens WILL be united but they WON’T have a lick of unity.  (You might also get arrested if you did that as well, but that’s another sermon ….)

Jesus is talking about and praying for something much different from that.  And I say that because I can’t get away from 17:16-17, the verses I told you to tuck away: READ.  You’re going to be OUT OF PLACE on earth and it’s gonna have a lot to do with truth.  See, authentic unity is based on something that is more tha just generic love or good will.  That’s political correctness, and we’ve all had more than enough of that, whether in corporate America or in higher education.  Nope.  Real unity comes from this shared allegiance to a set of incredible, counter-cultural truths that are summed up in Jesus.  These truths are like the thread (distribute?) that knits us together in ways that will keep us at odds with the world.

Think about the kind of truths that I’m talking about!  (And you might not even believe these yet!).  And the world is incredulous that we would be so gullible and so simple minded as to actually believe them …

You really believe one had to die for those sins?  YEP.

You really believe that Jesus rose from the dead?  YEP.

You really believe that Jesus is not just some nice Higher Power but he is the Highest Power?  YEP

You really believe that marriage is for a man & a woman? YEP.

You really believe in turning the other cheek?  YEP.

You really believe that after you die you’ll get a resurrected, glorified body?  YEP

You really believe that the church is the place where people of all cultures, colors, and languages gather together?

You really believe that the church is here less to do good things than to share good news?  YEP.

You really believe that everything else in life is a pile of garbage compared to knowing Christ?  YEP.

Yep, yep, yep, yep.  That’s what Jesus is praying for!  A people bound together by those strange and strangely unpopular beliefs.  And I realized when I’ve seen his prayer answered.  I realized when I have been FOR THE CHURCH:  Christian unity comes from collective oddity.  Yes!  The church has unity because it’s weird and because you’re surrounded by other weirdos.  Church unity comes from shared strangeness.  It’s by our common agreement with and then living into to odd-maker truths.  That’s where unity comes.  Any unity has to have a foundation, and our just happens to be a foundation of resurrection-centered truths.  Then we shall know the truth and the truth is making us odd.  Hallelujah!  Christian unity comes from collective oddity.

This is why these days some of the old tribal (denominational) lines are falling as truth bridges are being built.  Like I have much more in common with my friends at places like Steele Creek Church of Charlotte or Forest Hill Church than some of my UMC colleagues.  I may be in the same denomination with some folks, but a different religion.  Especially my dear UMC friends whose minds have become so open that their brains fell out.  Because while we are FOR CHURCH here, and especially during FOR CHARLOTTE, I just gotta be real here and let you know that there are some expressions of church I’m not for.  Like those who would repeal what has already been revealed.  Churches that spend a lot of time trying to discern what God has already decided.  Nope.  Now: what I’m talking about is not all that widespread.  But it does always sound good.  Know why?  Because it sounds MORE LIKE THE WORLD.  Less odd.  More conventional.  More you believe what you believe and I’ll believe this and in the end it’s all good as long as you believe something.  Which sounds nice but is a load of bull.  People have died for centuries for believing that Jesus in unique and decisive and God forbid I trivialize their martyrdom by minimizing our Savior.  Remember: you modify the world to satisfy the world and the world just laughs that much harder.  Christian unity comes from collective oddity.

I say that because when it works, when you know Jesus’ prayer is being answered, it is so thrilling.  Like that time, just after I became a Xn, and I was playing in a tennis tournament.  And the guy on the court next to me was a well known Jesus Freak who I previously hated because he was a well-known Jesus Freak.  Yet here I was, this new person, made newly strange by these incredible beliefs, and we were playing not against each other but alongside each other.  So as we passed one another one time I just said, “Let’s do it for his glory.”  What kind of 17 year old talks like that?  A weird one!  But in that moment, regardless of who was winning or who was losing, we had the unity of the church.  Christian unity comes from collective oddity.

Or that time a few years later when in Monroe we had Baptists and Pentecostals and even a few Methodists marching on the streets FOR JESUS and not against anyone or anything (AV).  See what I mean about tribal walls down and truth bridges up?  Christian unity comes from collective oddity.

Or this past weekend when a group of us went to Wilmington to work on hurricane relief.  You know who WASN’T there?  American Atheists.  The Agnostic Fellowship.  Who was?  The church.  In a group like this from Samaritan’s Purse filled with Methodists and Pentecostals and Baptists and more. 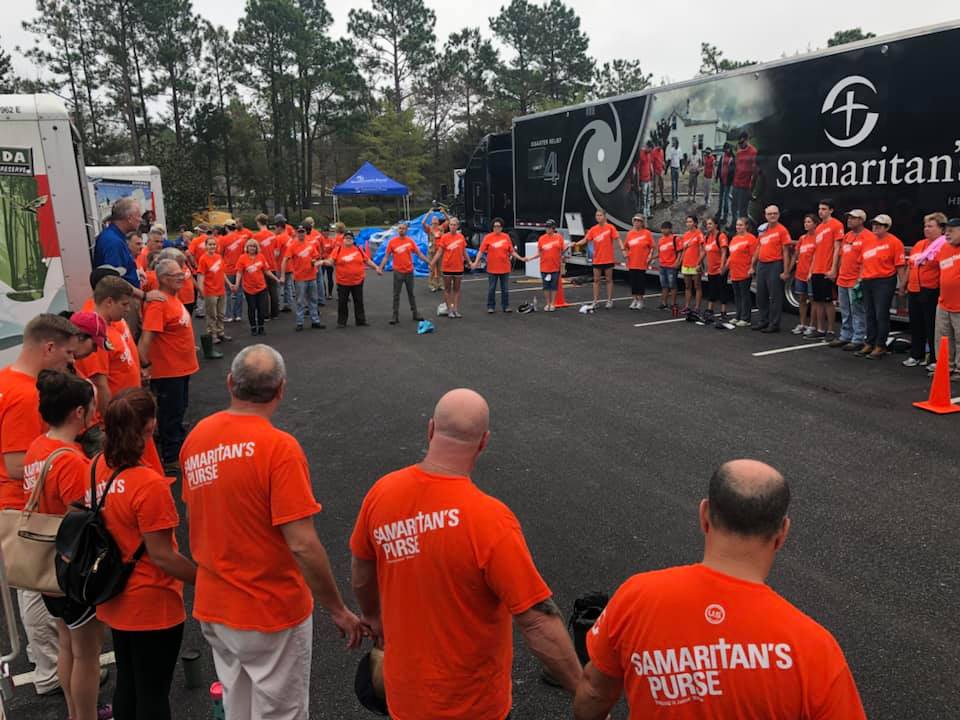 Oh, we stand out in unity and in service and so the world can’t help but stand up and notice.  Whether it’s one church that function in health or a group of them working together, skeptics notice.

And the gossip about the church that random people eavesdrop in on … well that’s not about what they’re doing wrong but how they’re being weird.  Christian unity comes from collective oddity.