So this happened yesterday: 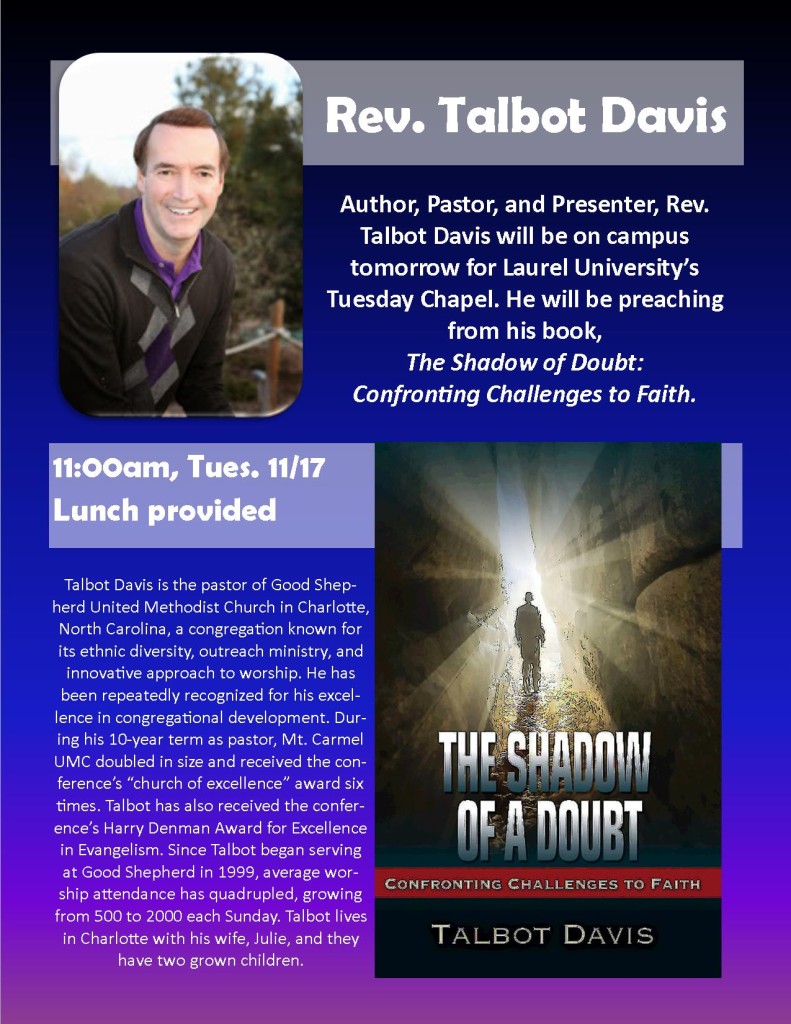 What was all that about?  Well, Laurel University is an intimate, picturesque, undergraduate institution with a distinctively Wesleyan approach to its theology and practice.

After all, its name until 2011 was John Wesley College and many of its faculty and staff have degrees from Asbury Seminary and Wesley Biblical Seminary.

In other words, it’s a safe space if you find predestinarian language either traumatizing or harmful.

Anyway, Laurel’s Director of Student Services had attended Good Shepherd last year, like what she saw and heard and felt, then heard about the Abingdon book deal, and so called me up and invited me to speak to one of the school’s chapel services.

So we finalized the date, she gave me parameters on what to wear (jacket and jeans, perfectly fine), and so yesterday I drove the two hours up to High Point.

An attentive crowd of 50 or so students, faculty, and staff assembled at the appointed hour.  We sang “I’m Trading My Sorrows,” after which I was introduced as “Reverend Davis,” and given 30 minutes or so to bring the student body to its knees (or something slightly less dramatic).

I gave a message that was drawn from Chapter Two of The Shadow Of A Doubt (which means of course that it was sermon number two in the original Shadow message series!) called Consider The Alternative.   I was able to share that some of my own times of darkest doubt came while studying for ministry — just like the students in the room.

The crowd was both attentive and polite, and the best surprise of all came afterwards: the school had purchased copies of The Shadow Of A Doubt for each student and opted to give them away for free.  The administration graciously called it “an investment in the students’ faith.”

So I spent the rest of the morning signing copies of the book and finding out where the Laurellians had attended high school and what their plans were for life after college.

All in all, a delightful way to spend a day, make new friends, and share a small slice of how the ministry of Good Shepherd has inspired sermons that have turned into books.