Dictation & Inspiration In The Letters Of Paul

When we think of Paul authoring his New Testament epistles — whether it’s the theological tour de force of Romans or the personal plea of Philemon — we typically envision him in this posture: 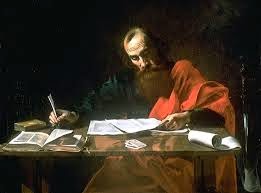 Alone with his thoughts and his God, pen in hand, parchments on desk, and, of course, Spirit hovering somewhere over the entire process.

Except that’s not what it looked like.  At all.  Instead, it likely resembled this: 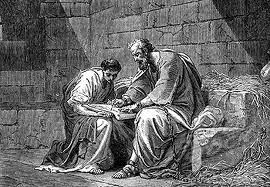 In chains.  Or a dungeon.  Or both.  But even more importantly: with a scribe.  The evidence strongly suggests that Paul dictated his letters and faithful scribes wrote them down and prepared them for delivery.

Most NT scholars use a more elegant term for scribe:  amanuensis.  That sounds so much more official, doesn’t it?  So from here on, amanuensis it is!

For example, Paul’s amanuensis in the letter to the Romans actually identifies himself in 16:22:

I, Tertius, who wrote down this letter, greet you in the Lord.

Can you imagine what it must have been like to listen to those sixteen chapters and capture both the flow and the intensity of Paul’s argument?

In other correspondence, Paul goes to some lengths to identify literally when he takes the pen from his amanuensis to sign his own name.  For example, see Colossians 4:18:  I, Paul, write this greeting in my own hand. Remember my chains. Grace be with you.

Similarly, 2 Thessalonians 3:17:  I, Paul, write this greeting in my own hand, which is the distinguishing mark in all my letters. This is how I write.

Or even Galatians 6:11, where Paul’s long-assumed vision problems come to the surface of his writing: See what large letters I use as I write to you with my own hand!

The most interesting place to see the dictation process at work is in the opening chapter of I Corinthians.  Paul is angry and frustrated as the letter begins — the Corinthians have divided into factions, based primarily on the personality of preachers they admire (wow, not much has changed, has it?), and both bitterness and licentiousness are the result.

So in the middle of his rebuke — and I can see him pacing around the room while his amanuensis struggles to keep up — Paul expresses relief in 1:14-15 that his baptismal work in Corinth was minimal:

14 I thank God that I did not baptize any of you except Crispus and Gaius, 15 so no one can say that you were baptized in my name.

Then, as he paces and pontificates, he stops short with a memory: by jove, I DID baptize some other folks!  So he pauses mid-sentence and dictates the following:

16 (Yes, I also baptized the household of Stephanas; beyond that, I don’t remember if I baptized anyone else.)

It’s an aside, an oh-by-the-way, a parenthetical statement — which is why English translations use parentheses! — that shows us the beautifully human way that biblical texts were divinely inspired.  Paul, in the throes of his rhetoric confesses to a faulty memory (Oh yeah! Those Stephanas people!  And maybe some others but I don’t remember!), and the faithful amanuensis gets it all down.

Does this window into the process make the bible somehow less inspired?  May it never be.

In my way of thinking, imagining the process elevates the inspiration by making it more human, and therefore more accessible.

Muslims contend that the Koran is straight dictation — all Allah, with no Mohammed filter at all.

The Christian conception of the bible is quite different.  We believe the God-breathed message of the Word gets delivered most compellingly through the passions and personalities of  the various authors.

Because if God can take a curmudgeon like Paul and turn him into a composer of inspired texts, imagine what he can do with you and me.