Conceived By The Holy Spirit, Born Of The Virgin Mary

Yesterday’s exploration of third line of the Apostles’ Creed — Conceived By The Holy Spirit, Born Of The Virgin Mary — jumped off of four simple words from Luke 3:23:

So it was thought.

I was first alerted to the significance of those four words in a though-provoking blog post from one of the area’s best-known pastors.  So when it came time to develop a sermon dealing with the virgin conception and delivery of Jesus, that phrase would not let me go.

And voila!, a sermon that simultaneously celebrates Luke’s genius as an author and God’s brilliance as a creator and conceiver.

I was backed yesterday by some incredible worship leading from our band and choir, so it was hard not to preach with some enthusiasm.

Anyway, here’s a rough manuscript of the message itself, complete with a (relatively) full complement of graphics and a less-than-collegial shout out to one of our retired United Methodist bishops from the North Central Jurisdiction.

A few weeks ago, during the series Journey Of Stones, I had a message based on a passage from the Gospel of Luke (like today).  And during that sermon a very bright 8 year old girl took notes in a stream-of-consciousness but very accurate way, and afterwards mom and dad gave me a copy.  Here it is: 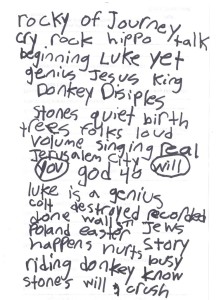 Can I tell you what happens to the faith if that bishop is right and Jesus was conceived the “normal” way?  It’s like this: 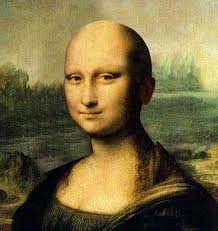 Something vital is missing, right?  The whole thing loses its coherence and beauty! That’s what happens!  The whole faith that brings us here is compromised.  Here’s why, and it’s not complicated but it is significant:  if Jesus was conceived the same way as all of us – IOW if the answer to the “whose your daddy?” question is Joseph – then what did he inherit?  The same thing all of us inherited from our parents!  The sin nature.  And if he had a sin nature, it is inevitable that he sinned.  And if he sinned then his death on the cross does NOTHING for us and our sins; it was simply the consequence of his own.  If he wasn’t sinless he couldn’t be our sin bearer.  So the Jesus story – from these beginnings to the future end – all connects together and if we discard THAT (The Virgin Birth) we almost of necessity discard THIS 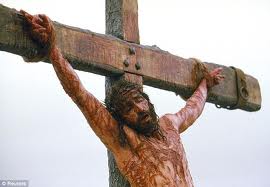 And again, this all matters because church leaders themselves became the “so it was thought-ers.”  And when they did, they dragged chunks of the church down with them into that morass of underestimating Jesus!  Reinterpreting his purpose on earth to be a role model or political activist or wise teacher rather than the spotless Lamb of God.  May. It. Never. Be.
So I just pray that kind of sloppy thinking and dangerous underestimating never happens here because you know what?  Jesus is more than you think.  So it was thought?  Hardly.  REFRAIN  Whatever wrong opinions of or wrong doctrines about Jesus exist in the world don’t change one iota who he really is.  Our confusions will never change the fact that he rose from the same grave that his underestimators occupy, that he is the A & O, the Hope Of Glory, the Risen King; and that he is all and is in all.  The best, most elevated thinking we can ever come up with about all that . . . and he is still more on top of it.  REFRAIN
And think of it!  It all started in the womb!  As cells! 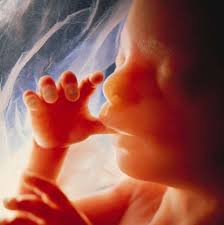 Whatever you call that – an embryo, a fetus, zygotes – hey! how about a baby! – when that was inside Mary, he was God.  Think of it!  God allowed himself to be walled in a womb.  Unfathomable!  I told you Jesus is more than you can think!  But, moms, imagine when Mary first felt Jesus kick . . . God had begun to grow inside her belly.  Incomprehensible.  And yet we’re invited to believe in what is more than we can understand.  Because for God to be consistent, for God to identify with us at every level of our being, he had to go throw all that earthy, visceral, fleshly experience of being born.  And nursing.  And diapers.  And growing up.  He experienced all we experience so he could identify with it.  That’s born of the Virgin Mary.
Yet for him to redeem all he experienced, for him to purchase us from our sin, the conception had to be supernatural; free of sin.  Not that married sex is sin.  It’s not!  (Can I hear an amen to that?) But it does pass on the sin gene we all have.  The Holy Spirit is the way around all that.  Conceived by the Holy Spirit gives us a Jesus who is 100 % man and 100 % God at the same time.  Can I explain that?  Nope.  Do I believe it?  Yep.  REFRAIN.
And in that “more than you think” Jesus is a master at holding opposites together.  Think of the line: conceived by the HS, born of the Virgin Mary.  We’ve said it so often and with such monotone voices that we overlook how jarring it is: virgin conceives. Virgins can’t conceive!  Everyone who is or has been a parent of teenagers knows exactly what I’m saying!  But Jesus holds those impossibilities, those opposites together.  It’s not the last time.  Babies aren’t kings.  This one was.  Masters don’t serve.  This one did.  Saviors don’t die.  This one did.  Sinners can’t get saved.  Now we can.  All opposites.  And when Jesus is in charge they get held together – in the same way that the Virgin Birth holds the great truths of the faith together.
And there’s one other opposite here:  peasants can’t be prophets.     The only two human names mentioned in the Creed are Pontius Pilate and Mary.  Just two.  And Mary here is a 15 year old peasant girl and has to suffer the indignity of an out-of-wedlock pregnancy which by law was supposed to result in her death!  And her carpenter fiancé has to endure the snickers of everyone in town.  And yet that’s who God uses to carry him for nine months in preparation for his entrance into the world.  He carried them as they carried him.  Jesus is more than you think and so he’ll do more than you expect.
Listen to how Frederick Buecher says it:
You know what all that means?  When you declare I believe in Jesus Christ . . . conceived by the Holy Spirit, born of the Virgin Mary you are declaring that you believe in a God who chooses the unlikeliest of people to do the most unexpected of things.  People like you.  That when you are sold out to the Jesus about whom you cannot think high enough he’ll do this crazy thing of allowing someone like YOU – couch potato, hothead, addict, philanderer, or wallflower – to carry him to folks around you.
So it was thought?  No way. So he is.  And so you are.  A carrier of Jesus.  REFRAIN.